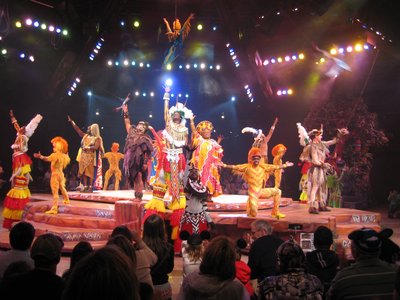 The Festival of the Lion King

The Camp Minnie-Mickey area of Disney’s Animal Kingdom theme park features a great show – on that is truly a “must see” spectacular and wildly popular: The Festival of the Lion King. It takes place in the Campside Circle Theater. This show is based on the classic animated film, The Lion King. Characters from the movie come alive on stage in this energetic adaptation.

This show has been running at the Animal Kingdom since the very beginning and its popularity has only increased since that time. The Festival of the Lion King is located in a comfortable theater – that is thankfully air-conditioned  – and features bench seating. It is a relaxing and soothing atmosphere, and provides a nice rest after you have been out in the theme park all day.

The festival, or the show, is set in an African savanna setting. This means that, at any given moment, you can see elephants, gazelles, zebras, giraffes, lions, and birds scattered throughout the theater. This breathtaking show at Disney World features an extravagant display of visual effects, colors, and talent.

Songs from the movie are featured, along with puppets and dancing performers. Simba is a huge 12 foot figure. Other puppets that can be seen are Pumba, Mufasa, Zazu, Timone, and Rafiki. These puppets make up the main cast members, along with four other human singers and performers. These performers are dressed in African attire and they each have African names such as Nakawa, Kiume, Zawadi, and Kibibi. Each of these names has a different meaning.

Even though you will see all of the familiar characters from the movie and hear all of the familiar songs, this festival is not a retelling of the storyline in the movie. It is its own unique creation, reminiscent of a live Broadway show. Everything takes place on four huge rolling stages.

You Can Be A Part Of The Show

Seating is divided into four sections which surrounds the stage. This allows for optimum viewing. You will sit in the warthog, elephant, lion, or giraffe section. You will be invited to participate in the festivities, depending on the section you are sitting in. For instance, if you are sitting in the giraffe section, you may be asked to make a noise that sounds like a giraffe. If you didn’t know that giraffe’s had a special sound, you will learn that they make the same sound as sheep do.

Children are often invited to dance along with the characters and performers. Everyone can sing along if they are familiar with the songs from the movie. Popular songs include: The Lion Sleeps Tonight, Hakuna Matata, The Circle of Life, and I Just Can’t Wait to be King. If for some reason you do not know these songs, they are easy to catch on to as many songs will be sung more than once.

While the Festival of the Lion King show is only thirty minutes long, a lot of activity is packed into this short time frame. Breathtaking gymnastics and acrobatics take place by intriguing characters called the Tumble Monkeys. These are a group of performers who are dressed in brightly colored orange monkey costumes. These monkeys perform their acrobatics on trampolines to the tune of Hakuna Matata, with Timone as the singer. The costumes are a dazzling array of colors, beads, and feathers.

You will even see people perform the amazing and daring feat of walking and dancing on stilts. In addition to the stilt walkers, you can also see aerial ballets and other magnificent feats such as fire juggling. Children are encouraged to participate throughout the show.

The finale is an explosion of color and movement as over 50 of the performers join together in an energetic display. Many songs from the movie are performed in a beautiful medley.  African dancers on stilts perform dazzling feats, and there is a parade around the theater in which children can join in by marching and even playing some of the African instruments.

Adults and children of all ages will enjoy the Festival of the Lion King. There is no experience quite like it, and many visit Disney’s Animal Kingdom Theme Park solely to attend this festival. Since it is such a popular show, be sure to get in line early so that you can choose a good seat. Arriving up to thirty minutes early should give you more than enough time.

Videoing and picture taking is allowed so that you can capture the memories that you will cherish for a lifetime.

The Festival is part parade, part circus, and park Broadway musical spectacular.  You are sure to love it.

What do you think about The Festival Of The Lion King?