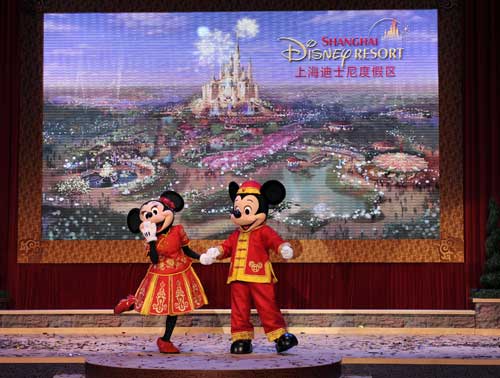 Top Five Things You Need To Know About Shanghai Disneyland

Shanghai Disneyland will officially open in June 2016, but tickets went on sale March 28th. Tickets to the park and rooms in the two hotels, the Toy Story Hotel and the Shanghai Disneyland Hotel, sold out for two weeks after opening day!

This could be a good sign for the future of the Disney Company.

Disney CEO Bob Iger says that there are about 330 million people within a three-hour drive or train ride from Shanghai who are income-qualified to visit the new theme park.  He suggested that the park expects to host 50 million guests annually and gross $3.7 billion to $6.2 billion dollars per year. If that’s the case, Shanghai could instantly become Disney’s busiest theme park.

By comparison, Disney World, which has four theme parks in one location, had a total of 51.5 million visitors in 2014.

Although it could be the busiest, Shanghai is currently the most affordable Disney Park. Guests can get an off-peak ticket for just $57 and a peak ticket is only $77. That’s much less than the nearby Hong Kong Disneyland park ticket costs, and Shanghai is three times its size. Although Disney has to split its earnings with Shanghai Shendi Group, which owns 57% of the park, that could still mean a nice profit.

Earnings Boost for the Company

Disney has been struggling lately as more people move from cable and satellite providers to on-demand TV viewing through private streaming services like Hulu, Netflix, and Amazon Fire. Disney’s cable networks including ESPN, Disney Channel, Freeform (previously ABC Family), and A&E have been losing subscribers because of this cord-cutting revolution.

If Shanghai Disneyland continues to perform well, it could offset the losses in the media division of the company.

Disney shouldn’t get too comfortable though. As the saying goes, “If you build it, they will come.” Other companies are realizing that there could be a huge market for theme parks in China, and they want in on the action. Most notably, Disney’s long-time rival Universal Studios plans to open a theme park by 2020. Since Universal’s park in Japan had almost 13 million visitors last year, this could make for some decent competition.

Shanghai Disneyland visitors are in for a treat. Although some things remain similar across the Disney brand, Disney has stayed true to the Chinese culture by placing familiar symbols including the golden peony, the lotus flower, and Chinese zodiacs all around the park.

Within the castle, guests will find a Bibbidi Bobbidi Boutique along with a character dining and meet and greet location as well as two (count ’em, two!) rides. There are also six lands in the new park including the familiar Fantasyland, Adventure Island, and Tomorrowland. Instead of a Main Street USA, though, guests will enter at Mickey Avenue.

Shanghai will see the familiar Pirates Of The Caribbean attraction, but there’s a new story and lots of amazing new technology: Battle for the Sunken Treasure.

Soarin‘ over the Horizon will also delight guests just like Soarin’ around the World in Disney World.

Is Shanghai Disneyland a good idea for Disney?