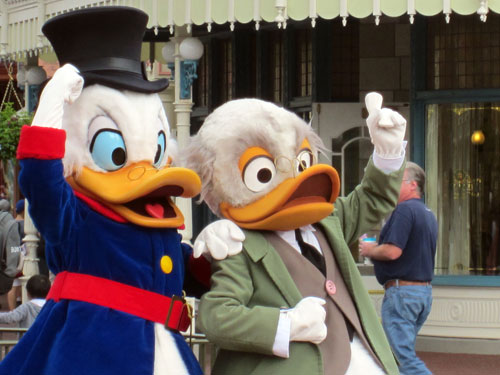 Disney Stock Is Dropping – Does It Mean No More Park Upgrades?

Why is this happening? What can Disney do about it?

Does this mean that Disney Park fans won’t get any more upgrades?  Or worse, could it mean that Mickey will actually cease to exist at some point in the future?

Why Is Disney Stock Dropping?

Many analysts and even Disney’s CEO, Bob Iger, attribute the recent drop in stocks to the “cord-cutting revolution,” where people are dropping their cable television subscriptions. Much of Disney’s growth and about half of its profits come from the media side of the business specifically ESPN. However, fewer people are watching ESPN, and more people are turning to the social media and Google for their sports updates rather than tuning into cable.

So what’s a mouse to do?

Iger says that Disney is considering selling ESPN directly to consumers much like Time Warner Cable is doing with HBO. This might be a smart move even as more people are engaging more with the digital platform of ESPN since ESPN continues to be the go-to sports-news giant. It appears that ESPN isn’t dying but that it is changing. Disney and ESPN must adjust to the times. Disney has a good reputation of being able to do this, plus it has the cash flow and capital to support the growing pains.

There are also rumors that Disney will cut Cast Member hours, and perhaps operating hours, at Walt Disney World in an effort to save money.  This is especially true with the over-budget Shanghai Disney Resort getting ready to open.

In addition, and as usually happens every year, Disney raised the prices of theme park tickets.

Despite a dropping stock and some budget issues, the company is soaring in other areas.

Star Wars: The Force Awakens has been a runaway box-office hit, and this trend is likely to continue with more movies, toys, merchandise, home entertainment games, and attractions in the parks. In fact, Disney recently announced that a new Star Wars Land will be part of the massive renovation at Disney’s Hollywood Studios.

What’s more, Pandora – The Land of Avatar is close to opening in Disney’s Animal Kingdom. Avatar’s director, James Cameron, has promised more movies, and the next one may even coincide with the opening of the much-anticipated land.

Frozen continues to break records as well even after the first movie has been out for some time. A new attraction is opening in World Showcase’s Norway pavilion, and a second movie has been promised for this story as well.

Disney has a strong standing in these areas.  As theme park fans, we get the benefit of successful movies being turned into new park attractions and lands.

Even with ESPN suffering with cable subscribers, Disney is making a bet that park guests will continue their faithfulness. In fact, this is such a huge bet that Disney is closing the failing DisneyQuest to open the NBA Experience in the newly renovated Disney Springs. Disney promises hands-on, interactive activities for all ages that put guests inside the world of professional basketball.

Take advantage of the downturn

We all love Disney and want the company to succeed, but like all companies, it has to watch its budgets carefully.  Fortunately, the company is looking ahead so that it can continue to do well for its owners and provide theme park fans with more new experiences in the future.

Now just may be the time to invest in the Disney Company!

What do you think Disney is in trouble as a business?