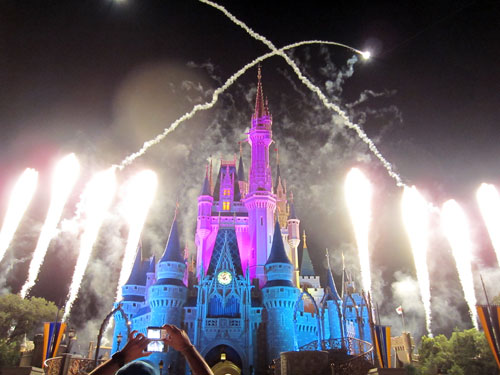 Pros and Cons of Being a Local Disney Fan

Do you dream of living in Orlando, FL so that you can be close to the Disney magic all the time?

Do you want to walk out your door and be just a short drive away from Magic Kingdom?

Wouldn’t it be great to be able to visit World Showcase anytime you want?

There are lots of great things about living near Disney World.  However, if you think being a local Disney fan would be so awesome that you’re ready to pack up all of your material possessions and move your clan to Florida, you might want to think twice.

Let’s consider the pros and cons of being a Disney local.

Planning: As a resident of Orlando, you can fairly quickly and easily access Disney property and enjoy all four theme parks, two water parks, shopping districts, golf courses, and the hundreds of restaurants on property. Visiting these areas often requires less planning. Just think of the possibilities!

Money: What’s more, as a local, you’ll probably spend less money during your visit – if you have a bit of self-control.  Why?  You won’t have to purchase souvenirs as soon as you see them.  Non-locals must buy souvenirs because they don’t know when they’ll be back. You, on the other hand, have the benefit of visiting whenever you want! You’ll be back soon to buy that really cool sweatshirt you found at the Emporium!

Time: Locals also spend less time per visit. Especially if you have an Annual Pass, which you probably do as a local resident, you could easily stop by Epcot, take in a few pavilions, and head home without aching feet!

Fun: Finally, your family fun is pretty much guaranteed as long as you maintain residence in Orlando. You can easily, quickly, and (relatively) inexpensively take your family to the most magical place on earth anytime you get a little urge for some pixie dust.

All that sounds great, doesn’t it?

Well, it might not be so great when you consider the downsides of being a local resident.

Focus: As a local, you’ll probably miss the big things and see the small things. You might not be as motivated to rush out the door to see the Rope Drop ceremony at Magic Kingdom because, hey, you’ll be back real soon! On the other hand, you’ll see the small changes, and they might annoy you. Did they change an ingredient in your favorite cupcake? There used to be chocolate shavings on top and now it has chocolate chunks. What’s the deal?! If something is broken or moved or worse – discontinued! – you’re more likely to notice it because you’ve grown accustomed to it. You get used to the way things are and you don’t like when they change. This isn’t what vacationing is about. A vacation is meant to be a time to experience new things! Non-locals have this benefit. Even if they visit frequently, it’s probably not enough to notice the small changes.

Planning: Remember that I mentioned the magical world where you don’t have to plan as much before you visit? Locals tend to procrastinate because they feel like they can. A non-local must plan their Advanced Dining Reservations six months in advance and FastPasses three months in advance and they have to buy the souvenir, but locals don’t! They think they can show up and take whatever dining reservation is available only to find that there isn’t anything available! What a bummer! FastPasses can be even worse since they are harder to get when you can only plan thirty days out.  What’s more, a local who says they’ll buy the souvenir on their next visit may return to find that it’s all sold out and there won’t be any more. So much for that Donald Duck pen set you wanted to give your dad for Christmas this year.

Lost Immersion: I also asked you to imagine being able to go to Disney on a whim. Wouldn’t it be great to stop by after work for Happily Ever After or IllumiNations? Maybe, but can you actually walk away from your day at the office? A non-local is on vacation, and although he or she may be checking e-mail or voice messages, they’re more detached from real life even if only physically. A local is never fully removed. Some locals even say that they never take a traditional vacation, as in leaving the house for an extended period of time to stay in a hotel and go somewhere they’ve never been. “Why would they want to?” a non-local asks, “They’ve got beaches and palm trees and DISNEY WORLD!” But the local just can’t escape and appreciate it. The non-local can live in the bubble that is Disney World even if only for a few days and appreciate all that makes Disney Disney!

Because of this, a non-local can stay for Magic Kingdom’s Kiss Goodnight, hop on the monorail, and head back to their comfy hotel room at Disney’s Grand Floridian Resort. A local would take the Kiss Goodnight for granted and rush back to their car so they don’t have to sit in traffic trying to get home saying to themselves, “we’ll see it next time.”

What I’m trying to say is not that it would be horrible living in Orlando because, believe me, it’s pretty great; all I’m saying is that a non-local may spend less time quantitatively but more time qualitatively than a local who many actually spend more time in the parks but less time really enjoying them.

Would you want to live in Orlando so you can experience more Disney fun?