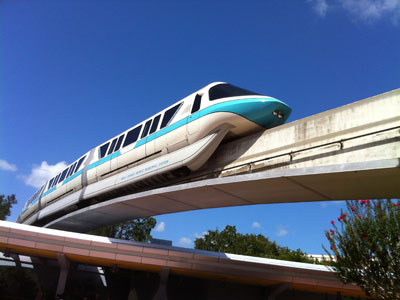 Finally, a Monorail Expansion that Might Make Financial Sense

I am a big Disney fan and a big monorail fan. Aside from Cinderella Castle, I think very few structures are more iconic for Walt Disney World than the monorail. If I were the Disney CEO for the day, and money were no object, I would definitely green light a monorail expansion. Right away.

I’m in no danger of instantly becoming a Disney executive, but I do know that execs have an obligation to make money for the company and its shareholders. While some Disney big wigs may be super fans like me, and they might even want to see more monorail track, they need to do it in a way that makes money. It’s just the way the world works.

I don’t think I’ve ever seen a full analysis of whether expanding the monorail could make financial sense. That’s what I am going to attempt today. Let’s have some fun with it.

How could a monorail pay for itself?

From a financial perspective, Disney could save money on gas and payroll for bus drivers if it builds more monorail tracks; but as you will see below, that is chump change compared to the major investment needed to get new monorails up and running.

Before we run some numbers, let’s look at a bit of history and background.

Do you remember the last monorail expansion? Are you sure?

The last expansion actually took place in 2010. Disney expanded the Epcot line by adding a 62-foot maintenance track to store a work tractor that can tow monorails that break down and inspect the monorail track. That’s a nice piece of trivia you can use to impress your friends, isn’t it?

Before that, of course, the monorail was last expanded in 1982 to connect the Ticket and Transportation Center to Epcot, adding about four miles to the nearly 15 total miles of existing track. I couldn’t find any numbers on the cost of that expansion, probably because Disney didn’t publicly break the numbers out separately from the overall Epcot construction cost (which was wildly over budget at the time, by the way).

If Disney could expand the monorail system for a few million dollars, they almost certainly would have done so long ago.

Based on these two real-world projects, it’s easy to see that $1 million per mile would be a bargain.

One Proposal – Let’s Run The Numbers

Let’s play with an idea.

What if Disney were to build a monorail with the idea of connecting theme parks and resort hotels, both adding a new transportation option and allowing the company to charger more for hotel rooms since some existing resorts would become upgraded monorail resorts.

Could building a new monorail line make financial sense in a situation like this?

Here is a new monorail path I made up. I don’t know if it makes sense from an engineering perspective, but let’s go with it. This new monorail loop connects the following locations:

Disney could build the monorail so that it could act as both an express route between Epcot and Disney’s Hollywood Studios as well as a resort route that made a stop at each of the three resorts. They could still accomplish this with a single track by using some sidetracks along the way.

My rough estimate is that the path above will take about 12,000 feet of new monorail track. Let’s call it three miles to be safe. That’s still a shorter than the four mile expansion from the Ticket and Transportation Center to Epcot.

Let’s say that, given the new status of a “monorail resort”, Disney could increase the price of all of the above resorts – let’s say $30 per night. Assuming the resorts are 75% occupied throughout the year, Disney could earn some extra cash:

That’s a cool $30 million in extra revenue per year. Nice.

But what would it cost to build that monorail? How much would Disney have to invest to get that extra $30 million a year?

Let’s assume Disney can build the monorail for the same price as São Paulo – $50 million per mile. The proposed track runs about three miles, so that means this monorail expansion would cost $150 million.

Maybe, but not a Slam Dunk

This means that Disney could earn its money back on this project in about five years. A five year payback period is a typical minimum return on investment timeframe for many big companies.

So in this particular situation, with plenty of assumptions, it seems that building a monorail extension from Epcot to Disney’s Hollywood Studios makes financial sense – but just barely. A five year pay back isn’t great, but it’s not terrible either.

Of course all this is based on my numbers, which are just guesses. What if Disney could build the monorail less expensively? Or charge more money for the resorts?

It’s fun to think about, isn’t it?

I hope that some of the sharp pencil boys (aka accountants and financial analysts) over at Disney Imagineering are reading this article. Maybe they could let me know if my numbers are in the ballpark, or if a new monorail might be in our future?  We can always dream.

Would you like Disney to expand the monorail line?