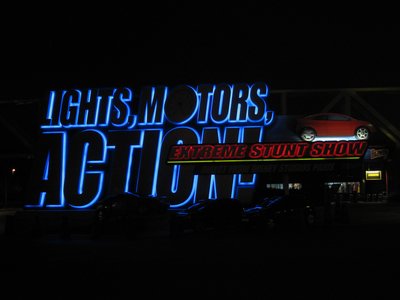 The word “Disney” brings to mind many words and mental pictures – magical, Mickey Mouse, the Cinderella Castle, explosions – but wait, what? Hold on here. One of these things is not like the other! “Explosions” is most certainly not a word or mental picture that goes with “Disney.” Sure, Walt Disney has some great action and adventure flicks like “National Treasure” and “Pirates Of The Caribbean,” but for the most part, “Explosions” is a word that might be better associated with action movies like “Die Hard” and “Fast and Furious,” so what is going on here? The Lights, Motors, Action! Extreme Stunt Show, honestly sounds a little more like the title to a Japanese Game show than an attraction at Walt Disney World Resort in Orlando, Florida.

This “extreme stunt show” makes a bit more sense as a Disney attraction when you hear that Lightning McQueen makes a guest appearance, until you remember that, though Lightning is a cute anthropomorphic car – he is a race car! Of course he would be a part of the Lights, Motors, Action! Extreme Stunt Show, whether it was a stunt show at Disney or not! Luckily, with this extreme stunt show being at Walt Disney World Resort, you don’t have to worry about it having an unhappy ending – even when these death-defying feats have you on the edge of your seat. Deep down inside, you know that the hero car wins, while the pursuit cars lose, and everyone lives happily ever after!

So what exactly is a stunt show? Ever watch action movies and wonder how they do all the cool stuff that they do? Maybe you are most interested in the trick where the guy on a motorcycle crashes through a window, or maybe you like car chases better. Regardless of what stunts you love, you’ll love Disney’s Lights, Motors, Action! Extreme Stunt Show. This show allows guests to see how some of these tricks are done. Just like on a film set, a group of trained drivers, along with a production crew, do stunts for the audience.

Disney’s Lights, Motors, Action! Extreme Stunt Show is 33-minutes long and is performed in the backlot area of Disney’s Hollywood Studios Theme Park. This show allows the audience to see not only the orchestration of their favorite mind-blowing stunts, but also the execution. Everything is filmed, edited live and played on a large screen so that the audience can see how the stunt looks in real life and what it would look like in a movie – with no CG or high tech stuff like that, otherwise it wouldn’t be much of a stunt show, no?

This stunt show was inspired by a stunt show at Walt Disney Studios Park at Disneyland in Paris. It was called “Moteurs… Action! Stunt Show Spectacular.” The Parisian show featured automobiles, driven by stunt drivers of course, performing the daring stunts that make up heart-pounding car chase scenes like in Disney’s “The Sorcerer’s Apprentice” and other blockbusters like “Gone In 60 Seconds.” Europe’s love of autos makes this attraction incredibly popular there, and with America’s love of NASCAR and drag racing, Disney had no reason to believe our response would be different. But of course, Disney being Disney, they had to upstage themselves, so rather than just an auto chase, they decided to add a few more stunts to the “Xperience” to make things a little more “Xtreme.”

What Stunts Will You See?

So, exactly which spectacular feats will you see performed before your very eyes? Well, you will watch a stunt man fall from a 5 story building, for one, which is a neat little trick. You will witness not one, but multiple giant fireballs explode across your field of vision – what a view, huh? You will also observe water vehicles like jet skis leap out of the water to get some serious altitude before crashing back down into the turbulent waves. You will also see a cycle of the motor variety drive through not one, but multiple windows – shattering each one almost artistically.

Finally, as with the French version of the show, you will see a car chase. Queue lights, get the camera rolling, and see vehicle upon vehicle chase each other around the backlot until the scene is utter chaos – a tornado of cars and a whole lot of adrenaline. See one stunt driver drive on only side of the car (two tire-driving) going about 50 miles an hour, while another is doing a power slide toward him. Your heart will be racing, you’ll be on the edge of your seat, and you won’t believe that this is an attraction at Walt Disney World Resort!

If you like the sound of this attraction, be sure to check out some of the Hollywood Studios Theme Park’s other behind-the-scenes style attractions. After all, Disney’s Hollywood Studio’s theme park is all about movies. To give you an idea of their more exciting attractions: you can climb blades of grass and explore a giant tub of play-dough in the “Honey, I Shrunk the Kids” Movie Set Adventure. You can take a Studio Backlot tour for even more up close and personal viewing of behind-the-scenes tricks and trade secrets – including plenty of cars, houses, and even alien vessels used in popular movies.

If you prefer, enjoy The Great Movie Ride, which allows you to walk right into scenes from some of your favorite movies, including “Raiders of the Lost Ark,” “Alien,” “Mary Poppins,” and so many more!  The Great Movie Ride really is a ride through both the history of film making as well as some of the most beloved movies of all time.

Check Out The Stunt Show

Whether you’re a film buff, a film fan or even just someone who likes to know how things work, you will love the Lights, Motors, Action! Extreme Stunt Show. Heck, you will love everything about the Hollywood Studios Theme Park at Walt Disney World Resort in Orlando, Florida.