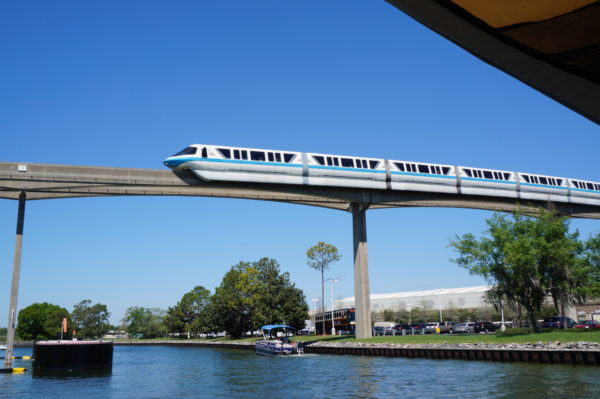 The Walt Disney World transportation system is vast and expansive, but it can also be confusing and frustrating at times.  Do you take a buse, tram, ferry, monorail, or (someday very soon) Skyliner gondola to get to where you want to go?

Fortunately, there are some “secret” shortcuts that you can take advantage of to save time, frustration, and even money!

Disney introduced Minnie Vans in cooperation with Lyft. These super-cute red and white polka dot vehicles meet Disney’s high standards because they’re driven by Cast Members. They’re also pretty expensive at $25 per vehicle for up to six guests.  However, there are some instances where Minnie Vans are worth the price.

First, if you have young children or anyone in a wheelchair or ECV, you might be better accommodated in a Minnie Van. Since the vehicles have car seats and can accommodate mobility devices, you might feel better about using them instead of a bus.

Also, if you’re visiting Magic Kingdom and you’re staying at one of the Disney resort hotels that isn’t on the monorail line, a Minnie Van can get you there faster than other forms of transportation. They’re the only private vehicles that can drop guests off right outside the park.

What’s more, if you have an Advanced Dining Reservation at Magic Kingdom or any of the Disney Resort Hotels, taking a Minnie Van will get you there on time. Since it’s so hard to get to Magic Kingdom and there is no transportation between resorts, you have to take multiple forms of transportation to get there. Pay the $25 might be worth it to make it to your ADR on time!

If you’re visiting the Settlement at Disney’s Fort Wilderness Resort and Campground, which includes the marina, Trail’s End Restaurant, and the Hoop Dee Doo Musical Revue, it’s a good idea to use the Minnie Van. Like at the Magic Kingdom, they’re the only private vehicle that can take you right to the Settlement. Otherwise your only option is the internal bus system at Fort Wilderness.

Finally, at the end of your vacation when you have to return to Orlando International Airport, taking a Minnie Van instead of Disney’s Magical Express might allow for a bit more time in Disney World. Magical Express wants to get you to the airport with plenty of time to check in and get to your gate, but often this leaves lots of time to spare. If you don’t feel like you need two to three hours for check in, you can opt to pay for the Minnie Van (which is more than $100 for this trip) and stay in Disney World just a bit longer.

The monorail is not only lots of fun, it’s also a great way to travel between many of Disney’s Deluxe Resort Hotels, Magic Kingdom, and Epcot. The problem is that there are three different routes, so figuring out which one to take can be confusing.

The first route travels between the Transportation and Ticket Center and Epcot. If you’re going from Disney’s Polynesian Resort, Disney’s Grand Floridian Resort and Spa, or Disney’s Contemporary Resort to Epcot, you’ll have to transfer at the TTC to this line.

The Express Monorail travels between the TTC and Magic Kingdom. This is the most direct route to Magic Kingdom, but that also means that the lines are often very long.  This is particularly true after the fireworks and park closing.

3 – Take a Bus to the Magic Kingdom from the TTC

Technically speaking, you can’t drive to Magic Kingdom. If you drive, you’ll have to park at the Transportation and Ticket Center, board a tram, then take a ferry or the monorail to the Magic Kingdom entrance. This design was meant to make you feel like you’re leaving the real world, but often times the journey induces stress and frustration and can take 30 minutes or more.

During busy periods, Disney sometimes offers bus service from the TTC to the Magic Kingdom.  Bus isn’t as magical, but it is typically much faster.

When entering the TTC and facing toward the monorail, take a look to the far right to see if Disney is running buses to the Magic Kingdom.

4 – Use the walking paths

The coolest walking path leads right into Epcot’s rear entrance to World Showcase between the United Kingdom and France. This area is called the International Gateway, and it’s quite magical walking into Epcot in this way! If you’re leaving Epcot, though, this is a great way to take a scenic walk past Disney’s Boardwalk Inn and Disney’s Boardwalk, Disney’s Yacht Club Resort, Disney’s Beach Club Resort, and the Disney World Swan and Dolphin Resorts.

There is also a walking path between Magic Kingdom and Disney’s Contemporary Resort Hotel. It’s a short walk, and it’s really convenient if you’re staying at this hotel.

One of the best things about most of Disney’s transportation is that is all included in your vacation price.

From the very beginning of your vacation, you can take advantage of free transportation. Disney’s Magical Express will pick you and your luggage up at Orlando International Airport (MCO) and deliver you both to your Disney Resort Hotel. As long as you plan to stay on property for the entirety of your vacation, this totally eliminates the need for a rental car. The service will even pick you and your luggage up at your hotel and return you both to the airport in time for your flight.

Once you’re on property, the resort buses, ferries, trams, and monorails are free. Even if your resort doesn’t offer these services, like the monorail, you can still ride for free.