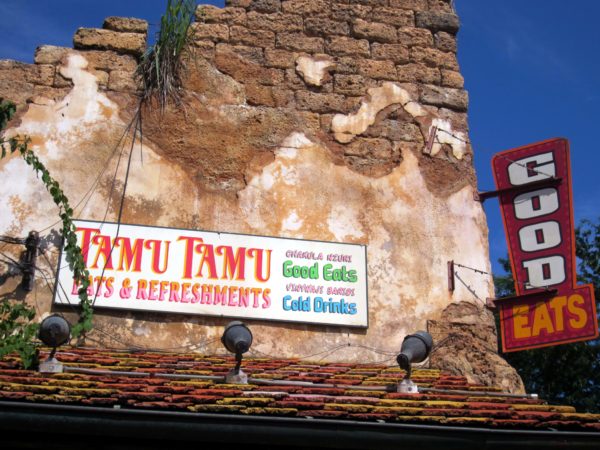 Many folks have long argued about whether Disney’s Animal Kingdom was half-day park since it was only open until dusk.

However, when Pandora – Land of Avatar opens, those arguments will end.  Animal Kingdom will definitely be a full-day park, and there will be a lot more to see, do, and eat once this Pandora opens.

Touring Plans surveyed over 100,000 people to find out which Disney World restaurants were the best and the worst in 2016. You can be sure that there will be more restaurants added over the next year, so these ratings will likely change quickly!

Tamu Tamu Refreshments in Harambe Village in the Africa section is a great place to satisfy your sweet tooth. Besides the delicious chocolate waffle with ice cream, the double chocolate chip ice cream sandwich, and the chocolate covered espresso beans on the menu, this is also your stop for Dole Whip!  You’ll find the simple dole whip in a cup, but Tamu Tamu also serves up alcoholic Dole Whip.

If you’re following our rankings around Disney World, you know that the other top-rated sites were those that served Dole Whip, and it’s no different in Animal Kingdom.

Harambe Fruit Market is also located in Animal Kingdom’s Africa, and it is also a snack stand. You’ll find some healthier options here though including a Mickey Pretzel, fruit, veggie sticks, trail mix, chips, crackers, and yogurt plus a variety of beverages.

182 people were surveyed here, and 97% were satisfied with their meals. However, I have to say that it’s not too difficult to prepare these kinds of snacks!

The Royal Anandapur Tea Company is a hidden gem near Kali River Rapids in Asia. The small space is appropriately themed and serves teas and coffees hot, cold, and frozen from Joffrey’s plus hot chocolate, frozen lemonade, cappuccino, and smoothies. They also have some pastries and muffins.

Of the 112 people surveyed, over 95% enjoyed their tea and pastries.

Zuri’s Sweets Shop is a fun store with sweet and healthy snacks plus a variety of Africa-themed cookbooks and housewares. Uniquely, you can find exotic jerky and popcorn flavors!

95% of 127 people surveyed about the dining here gave it a thumbs up.

I have to say that I’m a bit surprised where Flame Tree Barbecue rates on this list since it’s one of my favorite restaurants in all of Disney World. It did, however, receive a lot more votes: 1425 to be exact! Almost 95% of the people enjoyed their famous BBQ!

It’s also important to note that Flame Tree has improved over the last year with expanded seating and waterfront views of Rivers of Light.

Thirsty River Bar and Trek Snacks is an all-day snack spot in Asia. For breakfast, you’ll find pastries and juice, and lunch and dinner brings other snacks like hummus and veggies, pretzels, and frozen treats plus alcoholic beverages.

Despite the fact that this is just outside one of the most popular attractions in Animal Kingdom, Expedition Everest, there were only 79 people surveyed here; however, over 91% of them gave it a thumbs up.

There’s a lot to like there. They serve unique dishes like a Teriyaki Beef Bowl, Honey Chicken, American Kobe Beef Hot Dog, Roasted Vegetable Couscous Wrap, egg rolls, and chicken fried rice. They even have kid’s meals and adult beverages.

Kusafiri Coffee Shop and Bakery is close to Kilimanjaro Safari, and it’s a convenient stop for breakfast, lunch or dinner. For breakfast, you’ll enjoy the hot breakfast wrap with egg, sausage, spinach, and goat cheese, the warm colossal cinnamon roll, or a variety of other pastries and snacks. The rest of the day, Kusafiri serves paninis, elephant ears, cookies, and more..

Out of 200 people surveyed, Kusafiri served slightly worse than average at an 87.5% positive rating with the average being 89.7%.

Restaurantosaurus received 510 votes with an 86.9% rating.

Anyone who has ever eaten pizza in Disney World knows that one thing Disney doesn’t do so well is pizza. It’s no surprise then that Pizzafari was rated significantly worse than average at 79.7%.

If you really must have pizza, you can find Pizzafari on Discovery Island. Fortunately, you’ll find a variety of flatbread options like shrimp, cheeseburger, Mediterranean, and the classic pepperoni and cheese. They also have salads, garlic knots, and tomato basil soup.

Eight Spoon Café, on Discovery Island, only earned 33 surveys, and comes in at last place on our list with just 75% positive ratings. This place must be pretty bad because they serve mostly macaroni and cheese, which is always a favorite.

Nomad Lounge ranked top of the list in table-service dining with over 97% of 107 people liking the experience.

It’s the lounge area attached to Tiffins, and you’ll find yummy appetizers like fish tacos, chicken wings, sliders, ribs, and a charcuterie board. Since it’s a lounge, there are also alcoholic and non-alcoholic beverages including specialty cocktails.

Dawa Bar is the lounge off of Tusker House in Harambe Village. Inside, you’ll find a variety of specialty and morning cocktails plus beer, and wine.

Dawa Bar earned high ratings; almost 95% of 192 people gave it a thumbs up.

Tiffins in Africa is new, and it’s part of the Rivers of Light Dining Package. It’s also the first table-service restaurant on the list that also serves a full dining menu. Surprisingly, Tiffins only got 194 votes; however, the almost 93% rating is pretty impressive.

Tusker House has been around a while, but it’s also part of the Rivers of Light Dining Package. It’s also a character dining location where you can meet Safari Donald Duck!

This buffet-style meal is very popular as evidenced by the over 1500 votes submitted resulting in a 92% positive rating.

Yak & Yeti honors the flavors of Asia and especially Nepal in a quaint village home setting. It’s open for lunch and dinner and serves small plates, shareables, soups & salads, noodle bowls, and specialty, wok, and grilled entrees. They also have specialty drinks, both alcoholic and non-alcoholic.

Yak & Yeti garnered almost 800 votes with over 92% of them being positive.

Rainforest Café happens to be one of my favorite chain restaurants in Disney World, but apparently not everyone agrees with me. In fact, 558 gave it an 83% rating, which is statistically significantly worse than any other table-service on the list.

Which Animal Kingdom restaurant is your favorite? Least favorite?