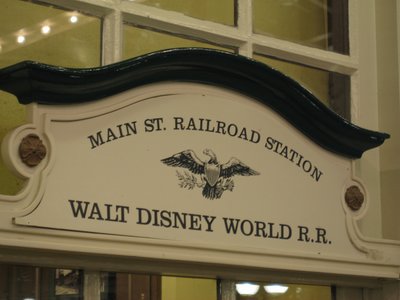 As an adult, Walt built a 1/8 scale model railroad that covered ½ mile in his backyard in Los Angeles. When planning his first theme park in California, and later planning Magic Kingdom in Florida, Walt insisted that both be surrounded by a working railroad.

The Walt Disney World Railroad debuted on the opening day of the Magic Kingdom park. The railroad is a full sized narrow gauge railroad with four antique steam powered locomotives that each circle the park hundreds of times a day. Well over a million passengers a year make the Walt Disney World Railroad one of the busiest steam powered railroads in the world.

Guests at Magic Kingdom can ride the Walt Disney World Railroad as a way of getting to a different part of the park, or simply to enjoy a grand scenic tour of the kingdom. The full tour of the 1.5-mile track takes about 20 minutes, and a little over half of that time to get to the station at the opposite end of the park.

Each locomotive engine pulls five passenger cars with seating for seventy-five passengers each. These are open-air cars to allow passengers a clear view of the scenery as they circle the park. The trains now use diesel fuel to create steam, but retain much of their antique appearance and still produce the unmistakable steam whistles that mark steam engines around the world. A clanging bell also announces the arrival of engines into a station, calling passengers who are waiting to board.

The Walt Disney World Railroad currently has three stations around Magic Kingdom. Main Street Station, visible from the entrance to Magic Kingdom, is the only original station remaining from the railroad’s opening in 1971. This station serves as the stage for the Magic Kingdom opening show that occurs daily before the opening of the park. The trains also participate in the show, with a locomotive steaming into the station carrying Mickey Mouse and his friends.

The current Frontierland station replaced the original, which was located where Splash Mountain currently sits. A station was added to Mickey’s Toontown Fair in the 1980s, and closed again in 2011 when Mickey’s Toontown Fair was permanently eliminated to make room for a Fantasyland expansion. A new station has now been built in the new Storybook Circus area of Fantasyland area.

A Fun Tour, But Not A Fast Tour

The Magic Kingdom covers a relatively small area, and most visitors can easily navigate the park more quickly than the Walt Disney World Railroad can circle it. Visitors in a hurry should not count on the trains getting them to a premium destination faster than they would get there on foot. However, the railroad is well worth a ride in its own right, and a great way to traverse the park while giving your feet a rest. It can come in especially handy for families with children who finish their day in Fantasyland before transporting exhausted kids back to their resort.

The Magic Behind Our Steam Trains Tour

Guests who find themselves as enthralled by steam trains as Walt Disney himself was should consider taking the Magic Behind Our Steam Trains Tour. This tour is one of many around the Walt Disney World resort that allows visitors to get a behind-the-scenes look at the workings of the Disney theme parks.

The steam trains tour begins before the park opens to visitors. Guests will have the opportunity to join the Disney engineers as they prepare and inspect the engines before their daily tours of the park. Participants in the tour will also take an exclusive ride aboard one of the trains while their Disney tour guide talks about the history of the railroad and locomotives at Walt Disney World. Admission to Magic Kingdom is required in order to participate in the tour, and guests must be at least ten years of age.

As a teenager, Walt Disney had a job selling newspapers and snacks on board the Atchison, Topeka, and Santa Fe Railroad that ran through his hometown of Marceline, Missouri. This experience cemented his love of railroads and trains, and inspired him to build his own backyard railroad as an adult. This 1/8 scale railroad was dubbed the Carolwood Pacific Railroad, and featured a working locomotive designed by engineer Roger E. Broggie in the Disney machine shop. He named it Carolwood after the street he lived on – Carolwood Drive – and modeled the engine after the beautiful locomotives of the Central Pacific Railroad. In honor of his wife Lillian, Walt named the engine Lilly Belle.

When Disneyland Park opened in 1955, it was surrounded by a two mile railroad named the Santa Fe & Disneyland Railroad (later renamed to the Disneyland Railroad). From the beginning, plans for Magic Kingdom included a similar railroad with steam-powered locomotives to take visitors on tours of the theme park.

The locomotives that circle the Disneyland Railroad were each built from scratch and modeled after the 1/8 scale locomotive from the Carolwood Pacific Railroad. However, the locomotives for the Walt Disney World Railroad are all restored antique freight trains from the turn of the 20th century. A scouting team that included Roger Broggie went to Mexico’s Yucatan Peninsula in 1969 and selected five locomotives that had been part of the United Railways of Yucatan.

One of the locomotives could not be restored, but the remaining four were refurbished by Disney Imagineers and live steam engineers. Engine number one was named the Walter E. Disney, and engine number 2 reused the name Lilly Belle from Disney’s backyard locomotive. Roger E. Broggie was given the honor of having the 3rd locomotive named after him in gratitude for his efforts in bringing the Walt Disney World Railroad to life, and the 4th engine was named in honor of Walt’s older brother Roy O. Disney after Roy’s passing in 1971.