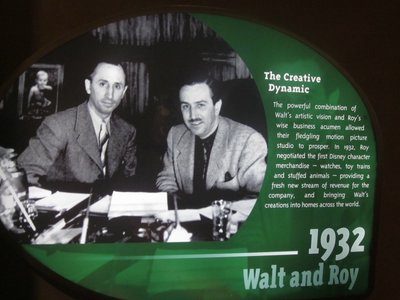 Walt and Roy worked together for many years, and Roy filled his promise to Walt see through the completion of Walt a final dream – Disney World.

Roy Oliver Disney joined his brother Walt in 1923 in forming the Disney Brothers Studio, which is the company we know today as The Disney Company.  Both Walt and Roy brought unique skills to the company.

Walt was an artist and visionary, and knew how to motivate people into doing great things.  Walt enjoyed the attention in the spotlight and used it to grow the company.  Roy, on the other hand, was more shy and generally avoided public attention.  In fact, there aren’t very many pictures of Roy for this very reason.  Before starting the company with Walt, Roy was a banker in Los Angeles.  Roy brought the financial expertise that was necessary to help Walt finance and achieve his dreams – all of which took great sums of money.

After the success of Disneyland, the company began to look for a land to build a second theme park.  Disney’s research showed that most visitors to the California park were from west of the Mississippi River, while a vast majority of the United States population at that time was east of the Mississippi River.  After looking at many different locations on the East Coast, Walt flew over a site in Orlando in 1963.  After using dummy corporations to assemble a huge tract of land, planning and construction for Disney World began.

When Walt died in 1966 from along the cancer, the entire company was in shock.  Its charismatic and visionary leader, the one who made all of the tiebreaking decisions, was gone.  The Disney World park in Florida was only partially completed.  There was great debate about what to do regarding Disney World.  Some thought the project should be abandoned or delayed.

However, Roy had made a promise to Walt shortly before he died that he would see through the completion of the Disney World project.  It was an amazing promise, especially considering that a Roy was 73 years old at the time that Walt passed away.

Roy was looking forward to retirement in spending more time with his family.  But instead, he took on one of the biggest construction projects in the world –one that used many advanced technologies and had amazing challenges.

Roy rallied together the resources necessary to complete the park.  Disney World opened as scheduled in October, 1971.  The opening ceremonies were grand and included a 1500 person choir singing “When You Wish Upon a Star” as well as the release of thousands of colorful balloons and a thousand person band..  Roy gave a speech, but it was not part of the television broadcast of the events.

Roy spent much of the opening day on a boat in the Seven Seas Lagoon.  Roy wanted the attention to be on the park in on Walt’s dream, not on all of the work he put into bringing the dream to life.  It was Roys’ idea to change the official name of the resort from Disney World to Walt Disney world, so that everyone would always remember that the place as the fulfillment of his brother Walt’s vision.

Just a few months after the opening of Disney World in 1971, Roy complained of a spot on his eye.  He made arrangements to go see an eye doctor, but he died not soon after from a stroke.

It is fitting that Roy renamed the project to be Walt Disney World to honor his brother, but many people don’t know the story of the incredible contribution that Roy O. Disney made to completing the initial construction of Walt Disney World.

Not far from the entrance to the Magic Kingdom, nearly on the spot where Roy delivered his opening day speech, there is a statue of Roy.  The statue shows Roy seated on a bench with Minnie Mouse sitting next to him.

There is great symbolism in the statue.  Roy a is leaning back on the bench and  his hand is beneath  Minnie’s hand, as if to support her as she sits down. Blaine Gibson, a master sculptor and a Disney Legend, explained some of the symbolism in a statue.  First, Roy is sitting back so that it is clear he is not inappropriately approaching Minnie – telling her to get back to work!  Also, Roy is supporting Minnie exactly as he supported his brother Walt.