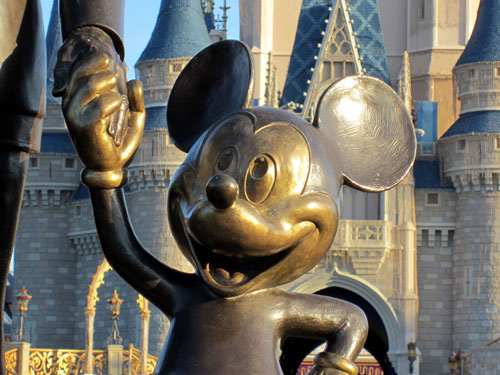 The Fascinating Back Story Behind the Walt Disney “Partners” Statue

The Partners Statue first appeared in Disneyland on November 18th, 1993, to commemorate the 65th birthday of Mickey Mouse in Steamboat Willie. Today, replicas stand at almost every Disneyland-inspired Park including Walt Disney World’s Magic Kingdom, in which the statue appeared in June 1995.

All of the statues were created and sculpted by legendary Disney animator and Imagineer, Blaine Gibson. Gibson worked for Disney from 1939-1983 starting as an apprentice animation artist and moving his way up the ladder. He sculpted Indian chiefs, mermaids, elephants, and the Haunted Mansion ghosts. He even created the iconic President Lincoln audio-animatronic.

After retiring from Disney, he continued to sculpt a new president every four years for Walt Disney World’s Hall of Presidents. In fact, the only president he didn’t sculpt was Obama, but he did consult on the head.

Ask anyone who ever met Walt, and they will tell you that Walt had facial expressions that were not only meaningful, but far surpassed those of a “normal” human being.

Gibson wanted to capture all of these important features in his statue, which took him about a year to get just right. He based his sculpting off of Walt in 1954 when Gibson believed Walt was at his prime.

Gibson said that, even when Walt died, he had very dark features including his eyes and hair, so he decided to use shadows to create color on the bronze statue. Look at the statue;  you will notice deep grooves in the hair and the pronounced brow. The expression on Walt’s face is said to represent how happy he felt watching happy people enjoy the park.

Walt and Lillian also wore an Irish Claddagh wedding ring to represent Walt’s Irish ancestry. On the right hand of the statue, you will see this ring plus the traditional wedding band on his left hand. In addition to the rings, there are three initials on Walt’s tie: “STR”. These initials stand for Smoke Tree Ranch, Walt’s vacation home in Palm Springs.

The details didn’t end with Walt, though. Mickey himself is a little mouse with a lot of life, and these real-life features had to come through in the statue. Mickey was originally depicted holding an ice cream cone, but Gibson and his team felt that this made Mickey appear too immature, so they designed him with his hand at his side.

One problem that Gibson and his team faced was the proportion of Mickey to Walt. Walt was actually only 5’10”, but the statue us larger than life measuring in at 6’5”. So how tall should Mickey be? Gibson remembered a time when Walt was recording Mickey’s voice for The Pointer (1939) during which he gestured that Mickey was about 3’ tall. This is the only time that Walt showed how tall he thought Mickey was.

When Gibson decided that Mickey should be holding Walt’s hand, they had a whole new problem! Walt had five fingers while Mickey only had four. How would these two hands fit together? The designers decided to consult Fantasia when Mickey shook the hand of the conductor.

What is Walt Pointing to?

Rumors have abounded as to what Walt is actually pointing Mickey to. Some say that he is pointing toward the future, and more specifically the future location of Epcot. Others say he is telling Roy to carry on the dream, and others to the trains, which Walt Disney World was based off of.

This goes along with the inscription under the statue at Walt Disney World which reads: “We believe in our idea: a family park where parents and children could have fun together.” –Walter Elias Disney. This echoes the sentiment from the statue in Disneyland, established two years earlier, which says: “I think most of all, what I want Disneyland to be is a happy place… where parents and children can have fun together.”

Today, cast members can earn a very prestigious award called the Partners in Excellence honor. Only about 2% of cast members receive this award because it is very difficult to earn. Cast members must demonstrate a continued commitment to excellent customer service and results.

One of the physical representations of this accolade is in the form of a miniature Partners Statue replica.

Are you a fan of the “Partners” Statue?  Do you know the backstory of its development?