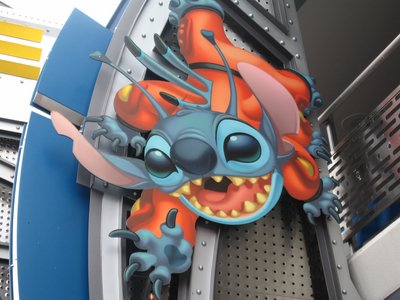 Stitch’s Great Escape!is a theatre-in-the-round experience in Magic Kingdom’s Tomorrowland. The show was inspired by the 2002 Disney animated film “Lilo & Stitch,” in which a young Hawaiian girl becomes friends with an escaped genetic experiment from another planet. Stitch’s Great Escape!, which debuted in 2004, uses audio animatronics, animation, and other sensory effects to engage the audience in the action of the show.

Disney and the Development of “4-D”

The full sensory experience of Stitch’s Great Escape! follows in the tradition of “4-D” films pioneered in the 1980s. The term “4-D” was coined to describe films that not only surrounded audience members with 3-D visual imagery but also provide smells and tactile features that help the audience to feel immersed in the film experience. “Captain EO,” a popular film starring Michael Jackson that played in Epcot and other Disney parks in the 1980s and returned in the wake of Jackson’s death – is considered to be the first successful 4-D film.

While Stitch’s Great Escape! uses a large audio animatronic figure rather than a film screen as the centerpiece of the action, the sensory features of the show are descended from “Captain EO” and films like it. The show makes use of various smells, water spray, puffs of air, and programmed chair movement to create the impression that Stitch himself is loose in the theatre and creating havoc.

The Story of Stitch’s Great Escape!

The movie “Lilo & Stitch” begins with the Galactic Federation deciding the fate of Experiment 626, a genetic experiment who has gotten out of control. The experiment escapes from the Federation and flees to Earth, where he encounters young Lilo and receives the name Stitch.

Stitch’s Great Escape! takes place before the main section of the film, involving the audience in the excitement of Stitch’s escape to Earth. Two pre-show films play as guests wait in line for the attraction; the first recruits the audience to be part of the Galactic Federation security team containing Experiment 626, and the second gives the audience their instructions to keep the prisoner under control.

Guests are ushered into the main show area with the announcement that a Level 3 prisoner is about to be teleported into the chamber to be guarded. After the audience has taken their seats, an enormous audio animatronic Stitch appears in a puff of smoke. He quickly manages to escape by shutting off all of the power in the chamber, and the sensory elements of the ride come into play as guests sit in the darkness and experience what feels like Stitch scrambling over their shoulders, and leaping past their heads. After the confusion in the darkness the power comes back on, and the Galactic Federation attempts to hit Stitch with laser cannons. However, the wily prisoner manages to evade the Federation and escape to Walt Disney World in Florida. The full show lasts for about 15 minutes from the time guests enter the first pre-show area for briefing.

A Bit of Controversy

When Stitch’s Great Escape! opened in 2004, it replaced a show called ExtraTERRORestrial Alien Encounter. Although this show was something of an anomaly at Magic Kingdom in that it was specifically designed for guests age 12 and older, it gained a strong cult following during its years of operation. Many fans of this attraction were very unhappy when it was shut down in 2003, complaining that Disney was removing a “classic” attraction from Tomorrowland in favor of a new and kid-friendly show. However, those fans may not realize that Alien Encounter only operated for nine years, and itself replaced a show – Mission to Mars – that ran for nearly 20 years from 1975 to 1993.

Other concerns related to Stitch’s Great Escape! may be more justified. Disney decided to remove ExtraTERRORestrial Alien Encounter because they felt that the ride was too frightening and did not fit well in the family-friendly world of the Magic Kingdom. However, many riders say that the change removed the dark humor and clever story that made Alien Encounter entertaining while keeping most of the things that made it scary.

Many children, especially those who love the character of Stitch from the movie, enjoy Stitch’s Great Escape! quite a lot. However, visitors should know what they are getting into before they make the decision to go, especially if they have kids with them. There is a lot of commotion in the show, from the firing of the laser cannons into the audience to lots of screaming when the lights go out. Children may be frightened in the total darkness, and by the feeling of something they can’t see climbing over them. This element of the show is a holdover from Alien Encounter.

There are also some elements of the show that, while not particularly scary, may strike many visitors as a bit gross. The audio animatronic Stitch spits into the audience to divert the laser cannons, and also releases a chili dog flavored burp with accompanying smell effects. Some visitors have complained that the smell in particular is a little too realistic, and may cause more sensitive guests to feel nauseated.

If you think you or your kids may be disturbed by any of these elements, it is probably a good idea to pass on Stitch’s Great Escape! or wait until they are a little older. There are plenty of other wonderful attractions to explore, and if you are looking for an indoor show that will allow you to cool down and rest your feet, the nearby Monsters, Inc. Laugh Floor is a great kid-friendly alternative.