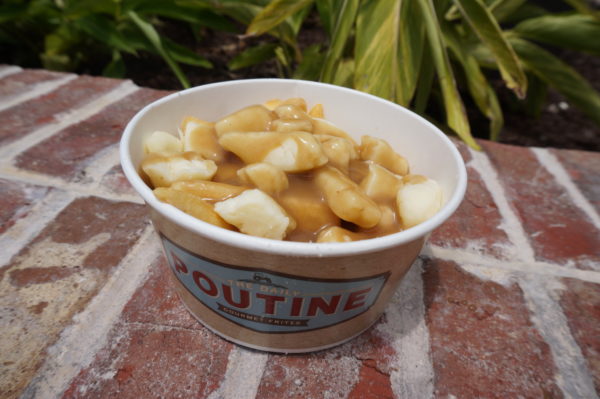 French fries are one of those things that that most all of us crave.

They’re crispy, they’re salty, and they’re oh so satisfying! French fries are a classic side dish, and they’re a staple in many people’s diets.

While you can definitely get good ol’ plain fries with ketchup during your vacation, Disney World takes French fries to the next level in some amazing ways.

Let’s take a look at the top five French fries in Disney World!

Beaches and Cream is located at the Boardwalk at Disney’s Beach Club Resort. As the name and location suggests, the restaurant has a retro beachy feel. This little soda shop is known for their delicious ice cream sundaes including the iconic Kitchen Sink.

But ice cream is not the topic of this article.

We’re talking French Fries, and here, they’re loaded! Actually, there are three different versions. The Sock Hop Fries are topped with brown gravy and shredded white cheddar cheese. The Chili-Cheese Fries are made with Homemade Chili, cheese sauce, and red onions, and the Cheese and Bacon Fries are topped with cheese sauce, bacon, red onions, and garlic-peppercorn ranch sauce! Delicious!

If you read by blog at all, you know that I love Flame Tree Barbecue. They have some of the best BBQ I’ve ever had; when you combine really good BBQ with French fries, you can’t go wrong!

As you’re making your way around Disney’s Animal Kingdom, be sure to stop by Flame Tree Barbecue at Discovery Island and order the French Fries with Pulled Pork and Cheese. There’s not too much special about the fries, but it’s topped with yummy cheese sauce, pulled pork, and finished off with sweet and savory barbecue sauce.

Flame Tree also has full meals and some lighter dishes like salads. What’s really great about this place is you get great food without Advanced Dining Reservations.

Unlike Flame Tree, Le Cellier does require an Advanced Dining Reservation. This fancy table-service restaurant in World Showcase’s Canada Pavilion is known for their tasty steaks and truffle butter sauce.

Sure, Canada is known for their steaks, but they’re also famous for their poutine! Le Cellier offers two different takes on Poutine, and they’re both delicious!

Plaza Restaurant is right on the corner of Main Street USA across from Casey’s Corner. This elegant dining room offers casual dining and the Plaza Ice Cream Parlor on the side. Lots of people overlook this restaurant, but if you’re looking for delicious French Fries, you’ll want to stop here.

Why? Because they have a reiteration of a classic Disney Dish: Figaro Fries. This dish used to be a favorite at Pinocchio’s Village Haus in Magic Kingdom, but when Fantasyland got a makeover, this dish didn’t make it on the new menu. It started with typical Disney French fries and were topped with cheese, lettuce, ranch dressing, and tomatoes.

Fortunately, this tasty plate lives on at Plaza Restaurant as Plaza Fries. While the new version adds bacon, Plaza Fries are the heart and soul of Figaro Fries.

Poutine has hit Disney World in a big way in the last couple years, so a top five French fry list wouldn’t be complete without classic poutine at the Daily Poutine.

The last stop is not in the parks but at Disney Springs instead. If you’re getting hungry walking around this entertainment district, pick up a dish of Classic Poutine. The thick-cut fries are delicious and perfectly crispy. They’re topped with brown gravy and cheese curds, and that’s it!

This small kiosk has other poutine dishes on the menu including Breakfast Poutine, Italian Poutine, Latin Poutine, and French Poutine. They even have special holiday poutine seasonally!

Where do you get your favorite fries in Disney World?