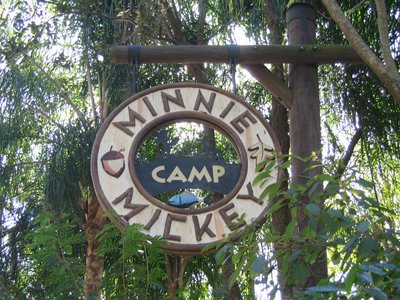 Before we talk about the Animal Kingdom Camp Minnie Mickey area, let’s take a short step back.  The Animal Kingdom Park of Walt Disney World Resort is the vastest Disney theme park in the world. It spans over 500 acres. Acres, which, thanks to Disney’s brilliant design and precise execution, look nothing like the surrounding city of Orlando, Florida. Let’s take a minute to wrap your brain around just how expansive 500 acres is, and just how impossible it is to scour every nook and cranny of every acre to get the most from your Walt Disney World Animal Kingdom experience.

Disney’s Animal Kingdom is divided into 7 different areas; each offers its own unique dining, shopping, attractions, animals and opportunities for vacation magic. Upon first glance, a larger-than-life, iconic area like Discovery Island, or an exotic area like Asia or Africa may seem more appealing than the down-to-earth Camp Minnie-Mickey Area of Disney’s Animal Kingdom Theme Park. Camp Minnie-Mickey seems like just some excuse to put the classic Disney characters into the animal themed park.

However, Camp Minnie-Mickey is a very unique theme park area. As well as being incredibly one of the family friendliest areas in all of the Animal Kingdom Park, Camp Minnie-Mickey has a genuine, nostalgic summer camp quality to it. Think over these three things when weighing your options about where in the Animal Kingdom to visit, especially if you have a family, young children or are just young at heart yourself.

These laid back trails are a breath of fresh air, downright relaxing in comparison with the hustle and bustle of the other Disney theme parks. Wander the trails with your family and pose for photos with your favorite Disney characters. Each character has their own trail, so there are plenty of winding paths to explore. Each trail has unique, picturesque meet-and-greet spots.

To add to the fun, you and your family can “collect the characters,” so to speak. The characters sign autographs! What a fun and inexpensive souvenir for your kids to take home and show their friends!

These character greeting trails are definitely a favorite Animal Kingdom attraction for kids. If your family doesn’t still have young children, fear not! Getting to meet all of your favorite walking talking Disney characters in person brings out the kid in everyone!  Disney cast members make sure that people of all ages, with or without kids, feel welcome.

The absolute best entertainment in Camp Minnie-Mickey, in the entire Disney’s Animal Kingdom Theme Park, and perhaps some of the greatest in the entire Walt Disney World Resort is The Festival of the Lion King.

The Festival of the Lion is presented in an air-conditioned indoor theatre. The seating is arena style. This means the stage is surrounded on all sides by the audience. Arena seating makes for a more up close and personal show.

The Festival of the Lion is a Broadway style musical revue based on Walt Disney’s classic animated feature film, The Lion King. The show features a colorful array of costumes, loveable characters, dazzling special effects, energetic dances and awe-inspiring puppetry. This larger than life reimagining of the Lion King Story packs a real punch. Even though the show is only 30 minutes long, it manages to tell quite a story.

This mismatched band of animals meets up with a tribe of four performers dressed in traditional African costumes. Each of the characters has a Swahili name with a special meaning: Nakawa means good-looking; Zawandi means gift; Kiume means strong and Kibbi means princess. In addition to these new added characters, a group of orange costumed acrobats play wacky characters known only as the Tumble Monkeys. The monkeys shock and amaze with their circus style aerobatics, slapstick clowning, and even fire juggling.

Each of the human characters plays to a section of the audience. The audience seating is divided into quarters, and each quarter has a respective animal – Giraffe, Warthog, Lion, and Elephant. Guests in each section of the audience are asked to participate in the show. They are given cues to which they are to respond with an animal noise befitting their assigned section.  Did you know that giraffes make a bleating sound like a sheep?  If you attend the show, you will learn that!

As if the show being interactive weren’t enough, you’ll find yourself singing, dancing and roaring along with the characters onstage. Walt Disney’s Festival of the Lion is chock full of award winning songs from the original film. You can’t help getting caught up in all the fun and excitement of this theatrical reimagining of the Lion King, when you hear the pop-y chorus of “Oh I Just Can’t Wait to Be King!” Sing along, interact with the costumed characters, and experience the Lion King as you never have before!

Short, Sweet and to the Point

The last advantage to paying Camp Minnie-Mickey a visit is that is a small area. Even meeting each and every on of the characters on the greeting trails and catching a showing of the Festival of the Lion will take you and your family a few hours, at most. This may not seem like much, but with the overwhelming number of attractions, entertainment and dining calling out for your attention; being able to see two parks or areas in a day without rushing through them both like you’re running away from a stalking lioness is quite a treat.

Despite appearing to be a bit old fashioned upon first glance, Camp Minnie-Mickey has much to offer those Walt Disney World patrons who wander its greeting trails. Between a meet and greet with your favorite characters and a parade-style dance extravaganza of a musical Broadway show, you will not be left wanting.