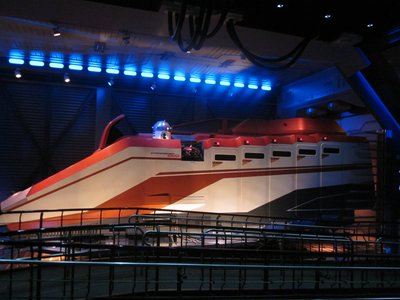 Disney’s Hollywood Studios pays homage to some of the most iconic films ever made. Included in those films are the legendary Star Wars movies. Star Wars fans are some of the most loyal and knowledgeable, so Disney knew that they had to offers some very special attractions just for them. One such attraction is Star Tours.

Star Tours at Disney’s Hollywood Studios, located in the Backlot section of the park, is a must see for any Star Wars fan who is at least 40 inches tall. The movies have great special effects, but what if you could actually be part of the action? Well, you can when you board the flight simulator that will carry you to a galaxy far, far away. Which galaxy?

This 3D adventure may take you to one of any number places such as Tatooine. You might meet Princess Leia or run into Boba Fett. You will never know which adventure you may embark on with Star Tours, so you can ride it again and again. Of course, Darth Vader is lurking around many corners, so you will probably have to get into a battle with him during your Star Tours adventure.

As mentioned above, guests must be at least 40 inches tall to ride Star Tours, but it is a mild – yet thrilling – adventure.

Star Tours are not the only Star Wars adventure for guests at Disney World. There are two other Disney World events that are dedicated to this movie and its faithful fan base.

If your child has dreamed about what it would be like to be a Jedi Knight this is his or her chance to find out. Children ages 4 to 12 can sign up for this epic adventure in the form of a live show. Each Jedi in training will dress up and take the oath of a Jedi Knight before being handed a light saber to begin their training.

As the training continues, the Jedi Training Academy will be invaded by Storm Troopers! It’s a good thing so many Jedi Knights will be on hand to do battle and beat back these evil invaders.

Since participation is limited to only 15 guests per show, each guest will have plenty of one on one time with the Jedi Master instructor. For the same reason, it is important to sign up early. The times that the show is offered may vary, so check the events calendar for current show time information.

Star Wars weekends are special events that draw thousands of Star Wars fans. These very special weekends include lots of fun activities all intended to honor George Lucas’ masterpieces. Star Wars weekends take place during the spring and usually include four or five weekends full of special events.
In addition to the Star Tours and Jedi Training Academy, those who visit during the Star Wars Weekends will also have the chance to meet celebrities from both the movies and the television shows of the Star Wars franchise.

The Hyperspace Hoopla gives guests a chance to party with some of their Star Wars favorites including Wookies, Stormtroopers, and Ewoks.

Below are some tips for those planning to visit during a Star Wars Weekend.

Star Wars is a great movie with throngs of loyal fans, but it is not the only movie or popular television show that has gotten the Disney treatment.  Disney’s Hollywood Studios features many others.

Some of the examples above, such as Twilight Zone Tower of Terror, are thrill rides for teens and adults. Others, such as Honey I Shrunk the Kids Movie Set Adventure, are for little kids. The fact is that there is something for everyone, and you don’t have to be a fan of the movie or television show to enjoy each of these attractions.

Even if you can’t come for a Star Wars Weekend, you can still enjoy the thrill of Star Tours and younger guests can hone their Jedi skills in the training academy. Walt Disney’s Star Tours should be on the must-do list of every true Star Wars fan.   May the force be with you!  (Sorry, we couldn’t resist.)