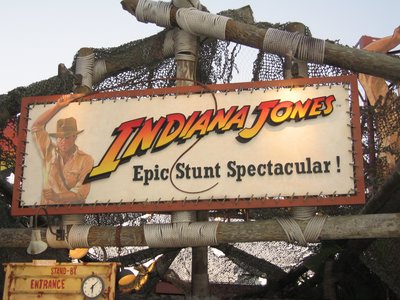 This attraction, located in Disney’s Hollywood Studios, looks just like it was torn from the set of Indiana Jones movies. As you enter the front gate of Disney’s Hollywood Studios (which used to be called Disney/MGM Studios), you just need to turn left and walk past Echo Lake, to the Indiana Jones Epic Stunt Spectacular. Show times are posted here and in any of the park brochures, which you can always get at the front gate.

This show is performed live by stunt men and women and includes spectacular explosions and action.  If there are small children in the family it might be best to sit back a few rows in the open (but covered by a roof) area so they won’t be scared by the intense heat of the fire columns and the loud noises.  The show is put on several times a day and the times may vary, so check the show times before you go to the theater.  There are plenty of other things in the park to occupy you if your show time is a few hours away.

The show lasts about thirty minutes and it recreates several memorable scenes from the movies.  Both pre-teens & teens, as well as adults, will love this show.  It’s classed as an extreme stunt show because action is intense and even includes a bit of “live” airplane action, plenty of whip cracking, and a lot of thrilling stunt action as well as good storylines.  A few selected audience members are chosen by a casting director before the show, and they will take part in some scenes of the show.

At the curtain, the set depicts an ancient temple ruin and then Indiana Jones steps in and the action begins.  As he searches for the golden idol, watch out for the giant rolling boulder which seems to know his every move.  There is a great chase scene in the show which involves a motorcycle and a Flying Wing aircraft, which is wheeling around the stage.  A movie director talks about all of the special effects and other stunts that Hollywood directors use in their films, as the show progresses through various scenes.

During the finale is when the pyrotechnicians and special effects artists have their big explosive and fiercely intense heated scenes, which will have you leaning back in your seat, feeling the warmth rolling from the stage.

Several performances offer sign language interpretation and you can check with any Disney cast member on this.  Disney also offers sign language at all four theme parks during various performances of live shows.  Disney makes every possible attraction in their theme parks as accessible to as many people as possible.  Assistive Listening Devices are also available at Guest Relations at all four parks.

During this Indiana Jones Epic Stunt Spectacular, guests using wheelchairs or scooters may remain in them as there is accommodation for wheeled devices in the auditorium.

Another tip for Disney’s Hollywood Studios and the other three parks is the Fast Pass system.  This allows you to “book” a spot for some period of time ahead of when you stop by the attraction, and then go off and do other things, instead of waiting in a long line.

When you return at your appointed time (usually an hour-long slot) you’ll be able to get into the attraction with little or no wait period.  Not every attraction has this so you can check a brochure to pick out your favorites that have this feature.  Indiana Jones, fortunately, is one of the attractions and because it’s so popular, get your Fast Pass first and then enjoy the rest of the park for awhile.

You can reach the Disney’s Hollywood Studios theme park by your own car or via one of the hundreds of Disney buses.  Also, there’s a launch which can bring you, as well as take you back, to Epcot, Disney’s Beach Club, Disney’s Yacht Club, and Boardwalk.  Via the buses or if you take the launch to Epcot, you can walk through that park to the front and link to other parks and areas via monorail and bus.  There’s a lot more to see at Disney’s Hollywood Studios, as well as a lot more to eat as well!

Things To See Near Indiana

Just past the Indiana Jones attraction is Star Tours, which is the site of a terrific motion simulator ride, and other things.

Another live stunt show is at the back of the park in the Lights, Motion, Action Extreme Stunt Show.

If you’d like a backlot tour, then the Studio Backlot Tour could be just the ticket.  Herbie the Love Bug is back there waiting for you.

A thrilling ride, but not for the fainthearted, is the Twilight Zone Tower of Terror.  After an introduction in the hotel library, you board a service elevator and drop a heart pounding thirteen stories.

Fantasmic is a fireworks and laser show in its own large outdoor arena.  There are usually two shows an evening on this one.  It is the signature nighttime spectacular at The Studios and you won’t want to miss it.

Toy Story Mania is towards the back of the park and behind the giant Mickey as The Sorcerer’s Apprentice hat.  Head here first and get your Fast Pass as they usually sell out.  This is the carnival ride where you get to shoot 3D rings at different targets.  It is one of the park’s most popular attractions.

In the back of Echo Lake, not far from The Indiana Jones Epic Stunt Spectacular, lies the American Idol experience.  This is a popular attraction where real people actually get to perform in the approximately 30 minute show.  They are auditioned some time before the show and three are chosen.  The audience votes and the finalists return for the last show of the day.  The winner each day gets a golden pass which allows them to jump to the head of the line at any audition for the real TV show.  It’s a really good opportunity for someone interested in starting a singing career.

During the show there are three judges — a nice one, a really cranky one (but in a nice, Disney kinda way), and a moderate one.  There’s a host, and the audience votes by means of a small unit in the arm of their chair.  This is a fun show and the audience seems to really enjoy it.  There are many intimate shows which are audience interactive, as well as the extremely popular.

There are a variety of souvenir shops, mini actor reenactments everywhere, a farmers market, great food in cafes and restaurants, and a large Dinosaur smack on the shore of Echo Lake.  As with any Disney park and perhaps after you come out from your Indiana Jones Epic Stunt Spectacular show, you can enjoy a parade down Hollywood Boulevard!