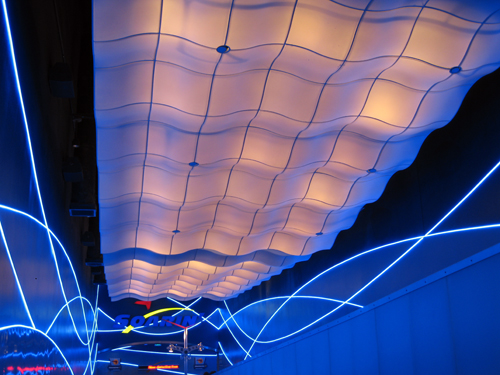 I’ve always found Disney trivia very interesting, and visiting Disney is more to me than just riding the rides. There are stories, defeats, and triumphs in each ride, and knowing these facts allows me to appreciate the ride that much more.

Here are seven things you might not know about Soarin’.

Soarin’ made its debut appearance in Disneyland’s California Adventure in 2001. The original story was that you were joining a hang gliding adventure over California. When Disney World’s The Land was being renovated, Disneyland gifted Soarin’ Over California to Disney World. The attraction opened in Epcot’s Future World on May 5th, 2005. When you hear Patrick Warburton say in the pre-show video, “Welcome to Flight 5505…”, this is a nod to the attraction’s opening day.

2 – The details are in the ceiling.

As with many Disney attractions, many of the best details are in places you wouldn’t normally look. In Soarin’, the ceiling features clouds that pass over. The lights will even dim when a cloud is above you and brighten again after it passes.

3 – The ride itself is multi-sensory.

Perhaps my favorite part of Soarin’ is the multi-sensory stimulation. Many of your senses are tickled as you see, hear, feel, and even smell the scenes pass by.

Maybe most interesting is the effect of the wind, which makes riders feel like they are moving and tilting at different angles. In fact, there is very little movement!

4 – The attraction is huge!

The “track” for Soarin’ is 1 million pounds of solid steel. Each time the ride vehicle (discussed next) is cycled, 37 tons is being lifted 40 feet into the air toward a 180-degree IMAX projection dome. This 80-foot high concave screen gives riders the immersive feel for which Soarin’ is known. The mechanical lift that allows for all of this to happen is smooth and quiet so as not to distract the guests from the story.

5 – The ride vehicle is pretty big too!

There are three ride vehicles in each of the three Soarin’ theaters. Each vehicle has three rows and can seat up to 10 guests in each row. Guests must be at least 40” tall to ride, and if riders don’t reach to the mark on the seats, they must use an additional safety harness. Each seat is made of a mesh-like canvas that allows wind to pass through giving you an all-over feeling of flying. Also, above your head is a winged canopy like what you would have if you were actually hang gliding.

When Disney Imagineers started thinking about Soarin’ in 1996, the ride was called Ultra Flight. The logistics required to make the original plan, which included three load levels and an inverted track, proved to be too much, and the idea was almost canned. The construction and labor costs would be so much with this design that Disney couldn’t justify spending the money – can you imagine that?

7 -Mike Sumner to the rescue!

After a long and frustrating experience with Ultra Flight, Disney Imagineers decided to take a break and go home for the holidays. They were instructed to spend time with their families in hopes that they would return refreshed and be able to decide what to do with the doomed ride.

While playing with his kids and his old Erector Set, Mike Sumner created a working model of a new ride system called the Cantilever System. This design would allow for up to 87 guests to load quickly, efficiently, and most importantly safely at the same time on the same level. The other Imagineers were impressed with Mike’s design, and their concept became a reality a few years later. The attraction was an instant hit and continues to be a favorite of Disney fans everyone.

Are you a Soarin’ fan?