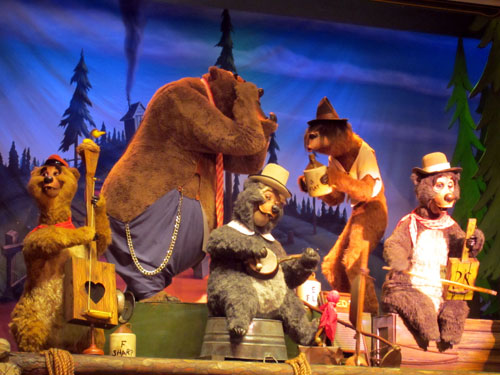 Weather in Central Florida can be unpredictable sometimes. Although it is mostly heavenly, guests can experience heavy afternoon rains, extreme heat, and even chilly morning and evening temps in the winter months.

What’s more, some suggest that guests can walk between 13-20 miles a day during their Walt Disney World vacation.

When either of these things becomes an issue, guests welcome attractions with shorter wait times spending more time enjoying and less time standing.

Here, for your enjoyment, are the top ten short-wait-time attractions at Walt Disney World:

The Country Bears arrived in the Magic Kingdom on October 1, 1971, and they have been delighting audiences with their 15 minute country music performance ever since. The wait time for this attraction is usually minimal. Unfortunately, this is probably because many guests overlook this great, classic Disney show.

The Liberty Square Riverboat is also an original Disney World Attraction opening October 1, 1971. Up to 450 guests board three decks of this authentic replica of a paddle wheel riverboat for a scenic ride down the Rivers of America and around Tom Sawyer Island. Because so many people can ride at once, guests will often only wait for the boat to return from its last voyage before being able to board.

It’s no secret that Walt Disney the man had an affinity for railroads, so this was a must have attraction in his Florida Project, later named Walt Disney World. There are now three stops: Main Street U.S.A, Frontierland, and Fantasyland on this 20-minute nostalgic ride around the Magic Kingdom. This is not only a great trip back in time, but also an fast and easy way to get from the back of the park to the front of the park if your feet are tired! Since the train can hold several passengers at a time, the only wait time you will likely experience is waiting for the next train to come.

Tomorrowland Transit Authority, better known as People Mover, opened on July 1st 1975. It is a slow moving ride that takes guests on a 10-minute tour of Tomorrowland. EPCOT was originally intended to be an actual city with real citizens. This didn’t happen for a few reasons, but that’s another article. The People Mover, originally called WEDWay, is a mass transit and emission-free form of transportation we might see in cities of the future. This is usually a short wait because each train holds many people!

The Carousel of Progress originally appeared at the 1964 World’s Fair in New York and opened in the Magic Kingdom January 15th, 1975. This ride is a slow moving circular stage that takes the audience back to the past and into the future showing how technology had evolved. The air-conditioned auditorium can be a welcome relief from the heat, and the comfy chairs are great for reenergizing your tired feet.

Tom Sawyer Island is a walk-through playground full of caves to explore. Since the island is only accessible by raft, you might have to wait a few minutes for another raft to arrive, but it is a quick river crossing. Parents can rest in the rocking chairs while children explore the island.

The Swiss Family Robinson Treehouse is a Walt Disney Classic. Although this attraction certainly won’t relieve tired feet, it is a shaded area and can quickly burn off some childhood energy. Since guests walk through and explore the treehouse at their own pace, the wait time is usually minimal.

This 12-minute long 4D film is both nostalgic and sensory. The show includes music from The Little Mermaid, Aladdin, Beauty and the Beast, and The Lion King presented by everyone’s favorite mouse and his friends! The show includes water, scent, and 3D effects. Since the auditorium holds a lot of people, you will probably only wait for the show to end. Take a seat, rest your feet, and enjoy the show!

Stich’s Great Escape is based on the hit movie, Lilo & Stitch. Stitch has been captured, and guests, known as Galactic Federation Recruits see how he is dealt with. Then Stich escapes and wreaks havoc in the theater. This is a fun ride, but guests should not ride if they are afraid of the dark or close spaces.

Monster’s Inc. Laugh Floor is a favorite for many guests for many reasons. While guests wait, they can submit their own jokes, and some of them will be told during the show! During the show, many guests will be spot lighted, and guest interaction is highly encouraged. The best part about this show is that it is never the same. You can visit several times, and the jokes will always be different because Mike and his monster friends, with a little bit of Disney Magic, are actually performing live!

What is your favorite short-wait-time attraction in the Magic Kingdom?