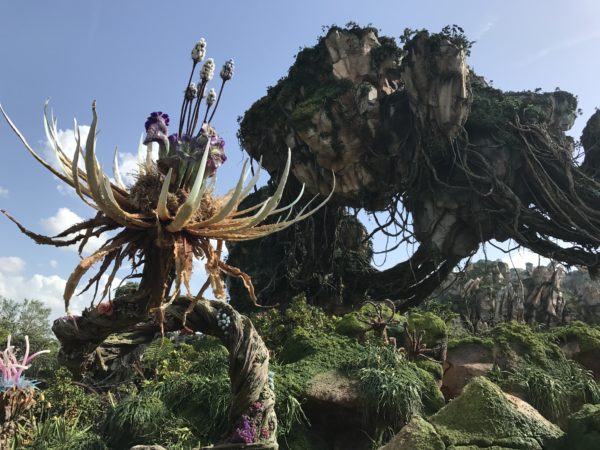 The Landscape of Pandora at Disney’s Animal Kingdom

When Disney World started creating Pandora – The Land of Avatar, everyone wondered about the rides.

Now that I’ve had a chance to personally experience it, I can say that Flight of Passage is an amazing attraction that allows guests to bond with a banshee and feel what it’s like to ride one. The ride vehicle even “breathes” while you’re riding.

After having personally tasted it, I can say that the food of Pandora is stellar with a totally unique presentation while maintaining some familiar flavors.

Sure, these are the big stories; but it may be easy to ignore – the land itself. The land of Pandora, called the Valley of Mo’ara, is incredible.  You truly feel like you are in a different time and place – an other-worldly place.

Let’s take a look at the landscape of Pandora – The Land of Avatar.

One of the main aspects of the Pandoran landscape is the floating mountains. These mountains look absolutely enormous, but they’re actually only 156 feet tall, just under 30 feet shorter than Cinderella Castle in Magic Kingdom. However, the mountains employ forced perspective to appear much larger than they actually are.

The mountains are held up by steel beams hidden by rock work and vines. It took Imagineers a year to create the support structure to hold up the mountains.

Imagineers drew inspiration from around the world. Disney sent them to Zhangjiajie National Forest Park, which is part of the Wulingyuan Scenic Area, in the Hunan Province of China. This area is known for pillar-like rock formations covered in dense foliage.

Imagineers also used the foliage of Hawaii as inspiration. From active volcanoes to beautiful beaches, Hawaii has it all. The land is lush and vibrant, and Pandora is too.

Throughout the last few years of the creation of Pandora, fans have been talking about the bioluminescent flowers. They were supposed to glow and light up the area, but we had no idea how that would work. Now we know. Each plant has a concealed box that controls the plant’s illuminations, and some of them have a sensor that responds to physical interaction from guests, a technology that was developed by Disney Research.

But how do these plants look so real? Well, landscaping Imagineers and Disney horticulturalists used real plants native to earth and sculpted them with the bioluminescent flora known to Pandora. It makes for some amazing scenery that is otherworldly yet somehow familiar.

Have you seen Pandora yet?  Do you want to?