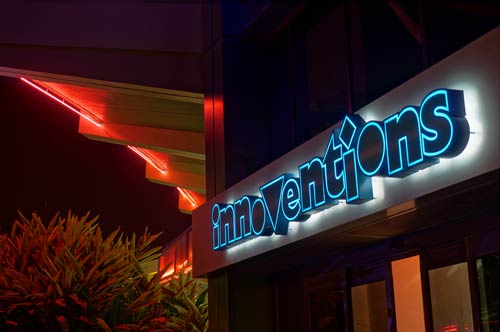 Walt Disney fans often have strong opinions about the involvement of corporate sponsors in the parks (especially when it comes to Starbucks on Main Street).  The truth is that corporate sponsorship has always been part of the Disney Company’s plans.

Specifically, when it comes to Epcot, Walt Disney himself planned for corporate sponsors to be a critical part of the experience all along. While Walt was probably thinking about Epcot in the context of a living city, the idea to include industry was there from the very beginning.

Walt is quoted as saying, “EPCOT will be an experimental prototype community of tomorrow that will take its cue from the new ideas and new technologies that are now emerging from the creative centers of American industry.”

While corporate sponsorship in Disney Parks usually takes the form of product placements or understated sponsorship signs, the corporate influence in Innoventions is far more up-front and direct.

There is nothing understated about the corporate influence in this area of Epcot.

If you are like me, in recent years you may have decided to skip Innoventions entirely, or perhaps you used it only as an air conditioned alleyway to get to attractions like Soarin‘ or Test Track.

Perhaps it’s time to give Innoventions a second look – at least so we all can have a better informed opinion on whether this area is “good as is” or “needs an update”.

What happens when you install a bank of standard household video consoles playing Disney games and line them up against the wall? You get the Video Playground.

Aside from providing a space where the video game makers inside the Disney Company can showcase their products, it’s difficult to understand just why this section of Innoventions exists. Perhaps it is to satisfy those folks who are mostly interested in gaming. It may be just to fill up space. Of all the sections of Innovations West, to me personally, this one seems to me to be one of the least interesting.  However, as you can see, many kids – and a few guys – really loved it.

We all know that careful financial planning is important. Being wise with money is critical as an adult, but the skills needed to be wise can form early in life. This interactive exhibit, sponsored by investment firm T. Rowe Price, takes the potentially dry topics of saving and investing and turns them into interactive games. As Disney knows how to do so well, it takes fun and inserts a bit of education into the process.

Unlike the other sections of Innoventions West, this exhibit, sponsored by IBM feels like a corporate museum.

While the message of this exhibit talks about making the world a better place (using technologies provided by IBM, of course), the area truly contrasts with the rest of the Innoventions. It is cold, white, and stark.  That can be beautiful in its own way, such as at the Apple Store, but here it looks and feels very different from the other Innoventions exhibits nearby.

The fun of checking out a real fire truck or searching for virtual hazards in a home meets up with education in “Where’s The Fire?”, an exhibit presented by a Liberty Mutual Insurance. This exhibit does a good job of making learning interactive and fun.

We Miss You, Segway Tour

While the Segway Tour inside Innoventions closed in the summer of 2011, the area where that experience once took place stands today as a quiet unused space. You can still see the murals toward the back of the exhibit which include shadowy images of people enjoying Segways.

While Disney still offers Seqway tours for a price, this area now sits largely unused most of the time.

Disney likes to promote the Visa cards it offers through Chase Bank. Those credit cards offer some Disney benefits including discounts at select merchandise locations. One of the nicer benefits of having a Disney Visa card by Chase can be found in Innoventions West. It is a character meet and greet which usually has short lines. If you have a Disney Visa card by Chase and are looking for some time with Disney characters, you will want to put this location on your agenda.

Innoventions is a very unique and different kind of place at Epcot.  Sponsors are up-front, making for a combination of fun and education, corporate-style.

What is your opinion of Innoventions West:  “Good as is” or “Needs an update”?