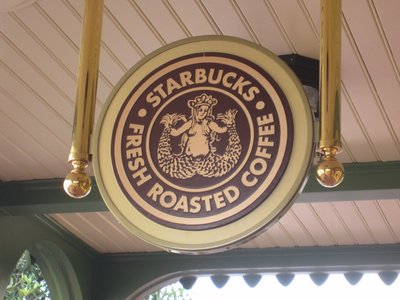 It has been in the works for a while – but as of Tuesday, June 18, 2013 the new Starbucks is now officially open in the Main Street Bakery on Main Street USA in the Magic Kingdom.

This opening is part of a larger agreement between Disney and Starbucks that promises a Starbucks in each of Disney’s US theme park.  A location is already open in Disney’s California Adventure, and one is under construction in Epcot.

Many Disney fans have been concerned that the new coffee location would not fit into the “turn of the century” feel of Main Street.  In fact, there was even a news story about a lawsuit to stop Starbucks (source) – but that was just an April fool’s joke.

The location retains its original name – The Main Street Bakery.  To me it seems that Disney did a good job of maintaining the look and feel of Main Street in the new store – although the location is now much more a coffee shop and much less a bakery.

Let’s take a look at the new location.

Disney did adjust the interior of the bakery – there is no longer any seating inside the restaurant.  This allows for more space to accommodate the typical huge lines.

Others have been concerned that their favorite food or drinks would no longer be available. Let’s take a look at the menu.  There is a full set of Starbucks beverages and Starbucks breakfast sandwiches.

The drink menu is extensive and includes Starbucks favorites:

The sandwiches include Bacon and Gouda; Ham and Cheddar; Sausage and Cheddar; and Spinach, Feta, and Cage-free egg-white.

It seems the original and very popular Cinnamon Roll is gone.  You can still get a huge Cinnamon Role in Gaston’s Tavern in the new Fantasyland.  Let’s look at the bakery items the are available.

The Main Street Bakery does accept Starbucks gift cards and the Starbucks mobile app, and you can earn Starbucks rewards at the Magic Kingdom bakery.  However, you cannot redeem Starbucks Rewards at this location.

Here are just a few examples on Main Street that have existed for quite a while and are located just steps away from Starbucks:

There is still one more confirmed Starbucks location set to open inside a Disney World theme park – at the former Fountain View ice cream location in the Future World section of Epcot. It is scheduled to open mid-summer 2013.

What do you think about Starbucks on Main Street?