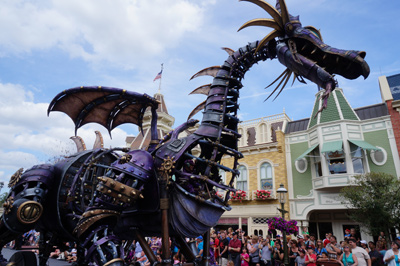 Festival of Fantasy Parade at the Magic Kingdom

On March 9, 2014 Disney started a daily 3:00 showing of the Festival of Fantasy Parade.

The parade follows the standard route, starting in Frontierland, making its way through Liberty Square, around the Cinderella Castle hub, and down Main Street USA and exiting by the Firehouse.

Unlike several of the recent parades at Disney World which included plenty of recycled elements, this one seems completely brand new. The parade floats are new, the music is new, and the very unique costumes are new. New is nice, isn’t it?

Like most large undertakings, this parade is a group effort. There are more than 100 performers in the parade. Mirena Rada designed the costumes, Richard Improta designed the parade floats, and Mark Hammond composed the music, which includes plenty of classic Disney tunes woven together.

Here is what you will see:

Ladies decked out in swan-inspired dresses lead the way for Disney princesses Belle from Beauty and the Beast, Cinderella, and Anna and Elsa from Disney’s Frozen.

Rapunzel leads the way on a huge float that features swinging pendulums.

Ariel sits high above the sea that is complete with plenty of dancing fish.

Energetic Lost Boys provide an introduction, and a giant skull leads the way, followed by a giant rainbow with Peter Pan up high and Captain Hook swinging below.

Better known as the steampunk dragon, this unit is a show stopper.

The Seven Dwarfs lead the way for Monstro the whale and Pinocchio.

Mickey and Minnie provide the finale, riding in a hot air balloon.

Check out this post of the World of Walt forum if you would like to see more close-up photos from the parade.