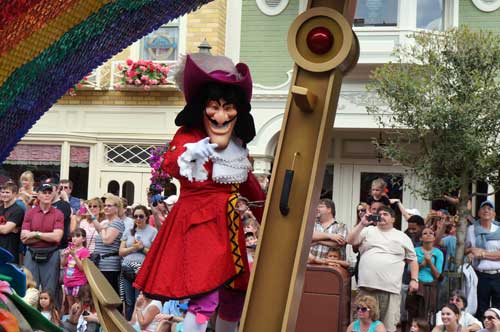 Disney’s Festival of Fantasy parade made its debut in Magic Kingdom on March 9, 2014. It replaced the Celebrate a Dream Come True Parade, which ran for 6 years until January 4, 2014.

Since its debut, thousands of people have fallen in love with this colorful, spectacular multimedia and pyrotechnic show. Here are just some of the many reasons why Festival of Fantasy has won our hearts!

Festival of Fantasy is such a photogenic parade. Because of the heights of the floats and the vibrant and energetic performers, it makes it a perfect opportunity for those who photograph Disney parks as a hobby. There is practically no bad place to shoot photos of the parade because you can see everything. The Maleficent steampunk dragon is 53 feet long and 23 feet high while the Jolly Roger ship soars 28 feet above the parade route. The parade finale floats combined are more than 90 feet long, with the tallest being Mickey Mouse’s airship. The sheer amount of details in the parade in the parade units and costumes makes this parade, contrary to its predecessor, a much better choice for photo ops.

The awesome choreography matches the equally amazing music! Senior Show Director Randy Wojcik was on hand to conduct the first workshop for the parade choreography to make sure the dances helped in conveying the stories. One of the most notable dances is the celebratory dance of the highland dancers for the Brave unit. It adds to the climax of the unit and helps everything flow perfectly. Another notable one is the caravan of characters during the big finale, where all the classic Disney characters and performers come together to end the tale! The choreography of the parade portrays the iconic moments of the fairytales we know in such a unique way that it’s like a new tale is being told every time you see it.

Watching the parade sends us on a roller coaster of overwhelming emotions! We have so many memories associated with the movies and characters in the parade. Festival of Fantasy embodies the very plaque you see before you go through the Magic Kingdom arches, “Here you leave today and enter the world of yesterday, tomorrow and fantasy.” It immerses us in a celebration of fantasy that we all come to Magic Kingdom to experience. It masterfully puts a modern spin on beloved classics with its costumes, floats, music, choreography and amazing performers. Most people who see it for the first time have the look of a child seeing presents under the tree on Christmas morning, and that’s the feeling Disney fans get every time they hear the fanfare of the trumpets in the beginning.

Disney is known for its attention to even the littlest detail. A stroll down Main Street is a great example of that. The amount of detail that went into even the costumes is extraordinary. The best part is that they put a spin on everything while staying true to the stories. The Steampunk Maleficent dragon has a spinning wheel in the center of its belly which is a nod to Aurora’s supposed “demise.” The tangled unit is full of Easter eggs inspired by details from the snuggly duckling from the movie, including Flynn Rider’s wanted poster (and they finally got his nose right!)  If you look close enough you will find nods to extinct Fantasyland attractions in the Fantasia inspired section of the finale unit, such as Mr. Toad’s Wild Ride. It can be fun to watch simply because you find something new each time.

The New Fantasyland expansion held its grand opening ceremony in 2012 however it wasn’t fully completed until May 28, 2014, when the Seven Dwarves Mine Train opened. When looking at the parade more closely, it is a major tie in to further promote the new fantasyland expansion which we have all pretty much fallen in love with. The Tangled unit matches up with the Tangled Restroom area while the Peter Pan unit links with Peter Pan’s Flight and its newly updated interactive queue. Belle and the Beast lead the parade most likely since Enchanted Tales with Belle, Be our Guest restaurant and the Gaston’s Tavern area was amongst the first of the expansion to open. Under the Sea: Journey of the Little Mermaid also opened the same time Enchanted Tales with Belle did and coincides with her parade unit. Even the Cha Cha Bingo girls’ costumes are a direct link to Storybook Circus. This was such a clever idea on Disney’s part to promote New Fantasyland as they continue to expand, possibly adding more to the parade in the future.

And last but certainly not least! The man, myth, and legend: Mickey Mouse! Unlike Celebrate a Dream True parade, Mickey and Minnie are the very last float of the parade. Mickey’s airship is the tallest float at 32 feet high, which is appropriate for his importance. Even his club march is a big part of the finale music in the parade. Mickey Mouse represents a dream that came true for Uncle Walt. For many people, visiting Disney World is that dream come true. The best way to end a fantastical parade showcasing all the dreamy, upbeat wonders and magic that the park has to offer is to see Mickey and his first lady. In a way, it lets guests know that they should let their fantasies and dreams set sail while they are here. We all love Mickey Mouse because he is number one!

Are you a fan of the Festival of Fantasy Parade?