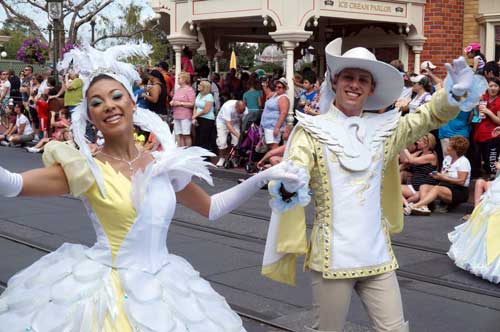 Disney’s Festival of Fantasy parade made its debut in Magic Kingdom on March 9, 2014. It replaced the Celebrate a Dream Come True Parade, which ran for 6 years until January 4, 2014. Since its debut, thousands of people have fallen in love with this colorful, spectacular multimedia and pyrotechnic show. Here are just some of the many reasons why Festival of Fantasy has won our hearts!

1 – The Memories and the Music

The Music of the parade is what catches your attention immediately. It begins with a trumpet fanfare announcing to the anxious crowd that their wait is over and the parade is on its way. The songs are masterfully combined, including classics such as the “Mickey Mouse Club March” and “Zip-A-Dee-Doo-Dah.” It also has songs to attract the newer generation of Disney Fans like “Let it Go” from “Frozen” and “Kiss the Girl” from “The Little Mermaid.” Mark Hammond, who has done work previously for Disney California Adventure’s “World of Color,” created the dreamy and upbeat musical score. You’ll definitely have the parade music stuck in your head for the rest of your trip.

Each Parade float is designed to tell the stories of iconic moments from Disney films and New Fantasyland in Magic Kingdom. In doing so Disney took two floats from Tokyo Disneyland’s old daytime parade named “Jubilation!” Each float is extravagant in detail for their own stories. Parade units include the Princess Garden that has Cinderella, Tiana and Belle with their princes, as well as Anna and Elsa. Ariel, Rapunzel and Merida have their own unique parade units, too. Ariel brings the party by sitting high atop a colorful seashell music box and Merida provides the dances by celebrating on top of her crown perched atop a giant shaped bagpipe. Adventure comes in the form of Peter Pan and his crew steering the Jolly Roger ship. Everyone’s favorite is the Steampunk-inspired dragon as Maleficent from “Sleeping Beauty:” mainly due to its unique design and its “fiery” climax. But nothing beats the upbeat finale brought by a magical caravan of characters, including none other than Mickey Mouse himself!

With so many characters in this 25 minute parade, it’s a young child’s dream come true! Anything can happen in Festival of Fantasy with the characters. Prince Phillip from “Sleeping Beauty “could take a break from battle to say hello to you! Mad Hatter from “Alice in Wonderland” is usually around being zany as always. Snow White brings her dwarf friends for a mini dance party, too! The characters are always interactive and giving away special moments for people, whether it be a hug or a hello. They are just as excited to be there as you are.

Everything Disney does, whether it be a restaurant or an attraction, has a story. The theme for the parade is fantasy. They creatively bring this theme to life by choosing the perfect Disney tales that evoke the very memories of Imagination and magic. The stories of Peter Pan, Sleeping Beauty, and the Princess and the Frog encompass the whimsical fun and fantasy that we all love and cherish. Disney mashes all them perfectly in the parade with what they do best: the details. They also celebrate New Fantasyland in the big finale with a circus theme, a nod to Storybook Circus.

What makes Festival of Fantasy great are the performers. The parade begins and ends with them ultimately. You have the graceful swan court dancers who lead the princesses in with some ballroom dancing. There are the gorgeous and vibrant floral maidens with some renaissance inspired dancing in theme with the tangled unit. We have the aquatic squad including a seashell girl, some coral, a wild lionfish and a duo of spinning seahorses bringing the party with Ariel. A crowd favorite are the “Newsies” inspired Lost Boys bringing the high spirit of adventure with them. Many people also enjoy the high kicking highland dancers celebrating their Scottish princess. The zany Cha Cha Bingo and Bubble girls bring the circus to Main Street USA, bringing some inspiration from Disney’s “Fantasia” The performers are bringing the celebration of all Disney fantasies to you!

Before Festival of Fantasy officially debuted in Magic Kingdom, Disney created a runway fashion show for the media to show off the costumes for its new parade. If that doesn’t tell you how amazing these costumes are, then I don’t know what will. Each costume has custom embroidery with 27 designed fabrics. They were all made in 10 different design houses spanning across eight cities and two countries and were 3D printed. Costume Designer Mirena Rada used visual cues like color and texture choices from each float and incorporated it into the designs. She also worked with Walt Disney World costumers to pick out fabrics that could withstand Florida climates while assisting the needs of the performer. There are almost 40 custom fabrics alone worn by the Lost Boys in the Peter Pan unit. Each piece for the ravens of the “Sleeping Beauty” unit was base coated, bronzed, lacquered and gilded with Swarovski stones. So much love, detail and hard work went into the costumes and it’s no wonder that they took almost a year to complete. Disney fans love the costumes of the parade so much that they have recreated the designs and worn them to events like the 24 hour day and Mickey’s Not So Scary Halloween Party.

Are you a fan of the Festival of Fantasy Parade?