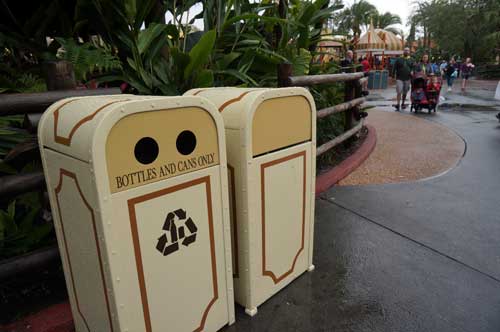 Disney Performs Magic With Trash – Underground Tubes Whisk It Away

When Magic Kingdom opened in 1971, it was an amazing feat of engineering.

There were five uniquely themed hotels, a monorail, and new and beloved attractions. This new resort would provide first-class entertainment and lodging to all of its guests.

In addition to all the exciting options that guests could see, there were many innovations behind the scenes.  Disney installed an advanced trash removal system that would keep waste out of sight and out of mind.

After the official announcement was made on April 30th, 1969, a press release noted that Disney would be the first stateside home to a very unique waste removal system. The plan would use the Swedish-built AVAC or Automated Vacuum Collection system.

This system is still in use today with 17 collection points around Magic Kingdom and an underground system of vacuum tubes. Every 15 minutes, trash is sucked at a speedy 60 miles per hour to a compactor located behind Splash Mountain. Here it is compressed and then removed from property.

All of this takes place in the utilidors. These underground corridors are actually on the first level of Magic Kingdom (you walk on the second level) and allow Cast Members to quickly move from one land to the next without being seen and for garbage to be magically whisked away out of sight of the guests.

If you’d like to see the utilidors and possibly the AVAC system for yourself, check out Keys to the Kingdom, a five-hour walking tour that takes guests behind the scenes of the most magical place on earth.

The AVAC system is used throughout Europe including the large cities of Barcelona and Stockholm, but its developers hoped that it would be adopted more readily in other areas.

As of this writing, the only other community using this technology is Roosevelt Island in New York. Around the same time that Disney announced its adoption, the Urban Development Corporation leased a small sliver of land from New York City to build a community that would provide developers the opportunity to make improvements they noticed didn’t exist in “normal” communities including a central parking garage for cars, a European-style walking area, a variety of housing to encourage diversity, and an AVAC system.

Although more cars have showed up than what the developers had hoped, the AVAC system worked as intended, and residents enjoy their technologically advanced waste removal system. Trash chutes are located in apartment buildings where it is transported to a compacting center. It is then loaded into containers and picked up by the NYC Department of Sanitation.

When Disney Company announced its adoption of this system, they said that it “holds great promise for communities of the future because of its efficiency and cleanliness.”

Perhaps there was some foreshadowing in this statement. Walt Disney envisioned an area at his Disney World Resort called the Environmental Prototype Community/City of Tomorrow (Epcot) that would be a real working town where residents would live and work.

After Walt’s death, Disney Company decided that it wasn’t willing to take on such a huge endeavor without the guidance of the resort’s pioneer. However, the AVAC system would have definitely been a technological advancement that would have piqued Walt’s interest. It allows for a clean, efficient, hidden way to remove garbage that is supposedly less expensive (once built of course) than traditional trash removal.

Unfortunately, Magic Kingdom is the only park in Walt Disney World and one of only two places in the country that uses the AVAC system.

Did you know Disney has one of the most advanced trash removal systems in the world?