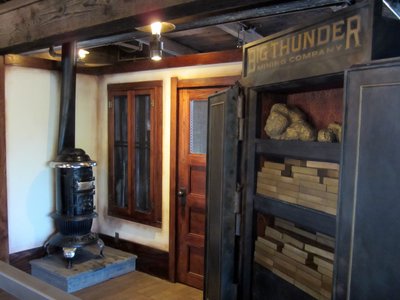 As part of Disney’s NexGen efforts to make waiting seem less like a drag, Imagineers have developed a new and detailed back story for Big Thunder Mountain in Frontierland, and they are installing interactive elements in the queue.

The story goes that Barnabas T. Bullion started the Big Thunder Mining Company and is looking for pay dirt in a huge find of gold. Unfortunately, local legend says that Big Thunder Mountain isn’t interested in giving up its gold and that those who try to get the gold will fail – as evidenced by natural disasters that mine train riders often experience. But still digging goes on in hopes of striking it rich.

While we don’t yet have official word on just how these new elements will come together, we do have photographs of many of the new interactive elements which are now visible in the queue, although they aren’t yet activated.