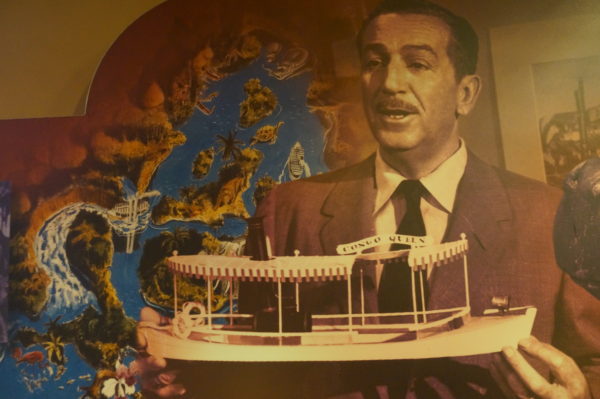 Even on a very surface level, there is lots of theming and detail in the Disney Parks. When you dig a little deeper, you realize that each land, each attraction, each restaurant, has a back story. Do a little research, and you realize that there is so much more to Disney Parks than meets the eye. Not only do all of the things have stories, but all of those stories connect in an intricate web that was planned and thought out extensively.

What lots of people don’t know is that there is a whole story behind these stories. Walt Disney Imagineering is responsible for creating, designing, and construction theme parks, attractions, Disney resort hotels, cruise ships, and pretty much every piece of entertainment venues around the world at all levels of development.

Today, we’re going to take a look at the history of this very important research and development division of The Walt Disney Company!

Walt Disney founded WDI, as it was called at the time, on December 16th, 1952 and asked his team to design Disneyland. This was no small task, but this group of designers and engineers was up for the challenge.

Walt’s brother Roy was the people person of the pair, and didn’t like the WDI name. He and others encouraged Walt to change it. Walt settled on WED Enterprises, representing Walt’s full name- Walter Elias Disney. Just one year later, in 1953, the name was changed.

For more than 30 years, WED Enterprises worked hard to create Disneyland, assist with Walt’s Florida Project that later became Disney World, and work on a number of other Disney-owned projects.

In 1961, WED Enterprises moved to a new headquarters in Glendale, CA, which they called Grand Central Creative Campus.

In 1986, 20 years after Walt’s death, WED Enterprises was renamed Walt Disney Imagineering. Despite the fact that other companies supposedly used the term as early as the 1940s, Disney claims that they first used the term in 1962. Regardless, Disney owns the term “Imagineering” as a registered trademark, so no one can use it now.

The term “Imagineering” isn’t the only creative bit that this group came up with, though. The department has been issued hundreds of patents for everything from lighting and special effects to ride systems.

One significant invention is the FastPass Virtual Queue, which has reduced wait times for guests in the parks. Another noteworthy invention is Audio animatronics. The first AA attraction, Great Moments with Mr. Lincoln at the 1964 New York World’s Fair, quickly led to the still popular Enchanted Tiki Room, and the astonishingly advanced AAs of today like the Shaman of Songs in Disney’s Animal Kingdom‘s Na’vi River Journey.

Today, there are more than 140 different job titles within the Imagineering umbrella including illustrators, architects, engineers, lighting designers, show writers, accountants, project managers, and graphic designers. Most of them work at the headquarters in Glendale, CA, but they often travel to other locations including to on-site projects.

Imagineering plays a vital role within the theme parks, and they do so by keeping a few very important principles in mind.

First, an idea must fulfill a specific need within the area, and this need must be presented with what Imagineers call Blue Sky Speculation. This means that any idea must be presented in the boldest way possible without considering any potential limitations. After all, Imagineers live by the slogan, “If you can dream it, you can do it.” In other words, there’s no such thing as impossible; if the idea is good enough, they’ll figure out a way to make it happen.

Imagineers also never kill a good idea. If it can’t be done right now or won’t fit within the parameters of logistics, they are known for tabling an idea and returning to it later – sometimes years or even decades later. Sometimes the ideas appear as they were envisioned, and other times they appear in totally different form.

Even attractions that have already been built are consistently being reworked. Walt said, Disneyland will never be completed “as long as there is imagination in the world,” and Imagineers take this seriously. They’re never allowed to let things look run down, and complacency is an absolute no-no. In fact, they’re currently working on improving their Audio Animatronic technology and transitioning to what they call Autonomatronics, which will perfect autonomously for a more realistic and authentic experience.