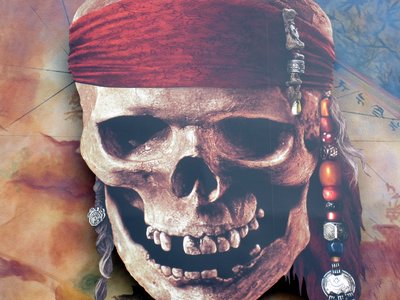 The Legend of Captain Jack Sparrow (With Video)

Disney has opened another attraction based on the classic Magic Kingdom boat ride the Pirates Of The Caribbean. But this one has no water, and is located in Disney’s Hollywood Studios – just down the street from Toy Story Midway Mania.

You walk into the main show area are surrounded by priate-y stuff: A huge sailing ship, rocks, lanterns, and skeletons. During the show, which calls upon some of the most popular themes from the Pirates movies, you will see a talking skull, mermaids, and a ghost ship.

The skull, which acts as the host and banters back and forth with Jack Sparrow, invites you to be a part of the show. You are asked to say “arrrrr…” like a pirate, stamp your feet to ward off mermaids, and say a little chant to send away some attacking skeletons.

It is difficult to capture the depth and detail of the video projections that surround you in this attraction, especially with it being so dark. But this video will give you a taste of what to expect.

What do you think about The Legend Of Jack Sparrow?