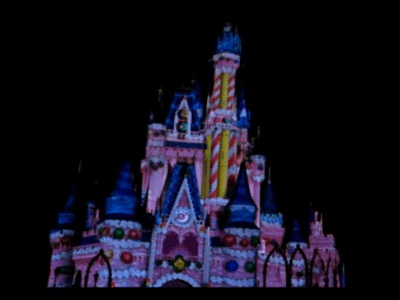 The new Cinderella Castle project show, called “Celebrate The Magic,” premiered on November 12, 2012. This is a refreshed show of the original Castle projection show called “The Magic, the Memories, and You!” which Disney first presented in January 2011.

Check out the video of the show below.

Disney announced that it will make periodic updates to the show like adding in scenes from “The Little Mermaid” during the summertime and adding in some Disney villains for Halloween.

Overall I think that Disney learned a few things from the previous incarnation of the Castle Show. This one seemed to keep the crowd entertained and seemed to utilize more effects that took advantage of the shape of the Castle itself.

A favorite is when they projected a pink-icing cake design on the Castle. This was reminiscent of when Disney infamously turned Cinderella Castle into a huge cake to celebrate the 25th anniversary of Disney World in 1996 by actually painting the Castle pink. Many folks, including me, thought that stunt back in 1996 was awful, but it was fun to see Disney poke fun at it now.

I thought it was a little odd that the Christmas songs were inserted into the middle of the show, and weren’t at the end. But overall it was an enjoyable ten minutes, with quite a few “ooh” and “ahh” moments.

Here is a list of the elements you will find in the show:

What do you think about the new Castle Projection Show?