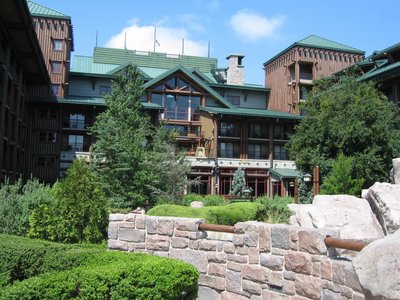 In a world of features designed and brought to life by Disney Imagineers and construction companies, Walt Disney World’s Bay Lake is one of the original natural features on the property. According to Disney lore, Walt Disney spotted the lake and its tranquil island from the air during a scouting trip when looking for land to build his new park.  He decided that it would be the perfect place to build the new resort he was planning.

Prior to the arrival of Disney, the little 10-acre island in Bay Lake was named Riles Island, and used as a hunting retreat by Florida business executives. Disney had big hopes for the island, originally imagining an elaborate pirate themed retreat named Blackbeard’s Island.

Over the next 30 years the island would undergo many changes, themes would come and go, but the little island that inspired Walt would never really fulfill its destiny as a successful part of the resort. Even so, Riles/Treasure/Discovery Island played a role in the development of the resort, and many people still hold out hope that the island will come into its own.

After the opening of Walt Disney World in 1971, Riles Island remained undeveloped for several years as the resort found its footing. Then, in 1974, the island was opened to the public with the pirate theme that Walt had originally envisioned. The name Blackbeard’s Island had already been given to a smaller island in the Disney-built Seven Seas Lagoon, so the island was named Treasure Island after the novel by Robert Louis Stevenson and the 1950 Disney film. The island included a secret hideaway, buried treasure, and a wreck of the Walrus – the fictional boat captained by the pirate Captain Flint, whose treasure spurs the narrative of the novel.

Unfortunately, the island languished in the shadow of Magic Kingdom theme park. Intended to be a retreat from the hectic nature of the park, Disney soon discovered that Magic Kingdom visitors didn’t seem to need a break, and preferred to remain at the park rather than leave for a half-day island excursion. After only two years in operation, Disney closed Treasure Island for renovations and changes.

These changes included adding around 50,000 cubic yards of soil to the island, bringing it up to its current size of 11.5 acres. The renovations also removed the majority of the pirate theming and replaced it with a conservation theme. Now guests to the island could come into contact with and learn about approximately 50 varieties of exotic bird and animal species.

The number of species continued to grow over the years, and by 1978 the island included a large aviary, a bird show, the Flamingo Pool, Turtle Beach, and much more. Over 140 species of animal now called the island home, along with 25 varieties of tropical plants. With the pirate theme gone, Disney staged a contest among cast members to rename the island, and eventually settled on Discovery Island.

Discovery Island was Disney’s first experience with wildlife conservation. They successfully bred species on the island, in addition to teaching guests about species endangerment and preservation. Residents of the island included trumpeter swans, several varieties of monkeys, large reptiles such as tortoises and alligators, and dozens of varieties of birds. In 1981, Disney received accreditation from the American Association of Zoos and Aquariums for the first time.

In spite of Disney’s success with their wildlife conservation efforts, Discovery Island remained a tough sell to Walt Disney World visitors. And 8 years after earning the accreditation, Disney’s status with the American Zoo and Aquarium Association was threatened by a state investigation. Finally, Disney announced plans that would ultimately spell the end of Discovery Island.

The original Discovery Island has remained closed in the years since, with no successful plans to bring it back to life. Today Bay Lake is the home to three different resorts (Disney’s Wilderness Lodge, Disney’s Contemporary Resort and Bay Lake Tower, and Disney’s Fort Wilderness Resort and Campground), but the little island itself is off limits to guests.

It seems unlikely that Disney will allow such a promising piece of land to remain vacant forever. Hopefully, they are just waiting for the right idea to make the island the center of adventure that Walt dreamed about.