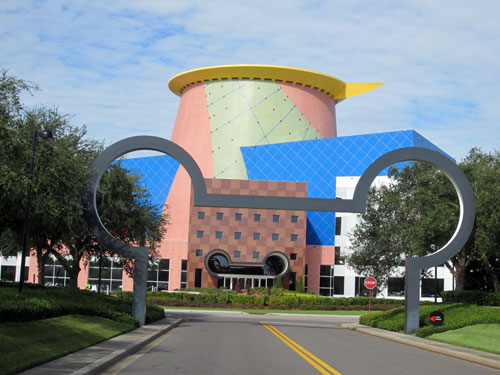 Have you ever looked across the street from Disney Springs and wondered what that big building behind the trees is for? You probably assumed it was some kind of business building, but you probably don’t know the story behind the building that houses the Finance, Accounting, Business Insight & Improvement, Legal, and Diversity & Community Relations Departments for Walt Disney World.

If it looks huge, that’s because it is! At 900 feet long, the building turned upright would be the tallest building in Florida.  The building contains 401,000 square feet.

9. It was designed by one of the world’s leading architects

When then CEO Michael Eisner commissioned Arata Isozaki, designer of the Museum of Contemporary Art in Los Angeles, to design the building, Isozaki came back with three designs. One was a fan designed as a nod to his Japanese heritage, one was a high-rise, and one was a low-rise.

Eisner dismissed the fan design and decided against the high-rise because it would look out of place. Instead, he asked Isozaki to develop the low-rise idea. He came back with what he described as an ocean liner: sleek, long, low, and beautiful.

8. It was supposed to be Lakeside of Caribbean Beach Resort

As Isozaki imagined the building, he thought it was going to be situated by the Lake at Disney’s Caribbean Beach Resort. When he found out that it would be moved to the Downtown Disney area, he wasn’t too happy.

However, his concerns were eased when Disney told him they could build a lake nearby and many more people would see the building since it would be closer to I-4 and on the way to Epcot.

If you were to fly over the Team Disney Building, it would look like a wristwatch.

Disney and Isozaki worked with other designers, engineers, and scientists to painstakingly perfect the sundial at the center of the building. It is a real, working sundial built out of Dryvet, a type of syrofoam, surrounded with Tennessee River Rock.

6. The quotes inside were handpicked

There are 88 stepping stones inside the building displaying quotes about time. Eisner spent many a sleepless night choosing each quote carefully. The quotes come from the greats like Einstein and Martin Luther King, and even Donald Duck!

5. The building is meant to represent the real and the fantasy

Upon entering the building’s center lobby, you’ll be greeted with an impressive approach with Mickey Ear archways, chaotic geometric shapes, bright colors, and a huge 120-foot funnel. As you walk through the sundial, things start to calm down and make sense, and the wings of the building, both equal in all ways, are neutral and quiet.

The real world is chaotic while Disney wanted its employees to feel calm and relaxed, ready to focus on their work without distractions.

4. It won the American Institute of Architects’ Award

Just one year after the building was completed, it won the 1992 American Institute of Architects’ Award. The selection committee said this of their choice: “This lively, eccentric headquarters celebrates fantasy while at the same time providing a serious, functional environment.”

When the sundial was completed, Eisner entered the huge courtyard and clapped his hands. He was delighted at the acoustics and pleased at the project’s result. The sundial was meant to create a sense of feeling lost in time and being timeless, and Eisner believed they had achieved this goal.

Isozaki became a very busy man, and he never got to see the building completed since he was wrapped up in other projects. While Disney begged him to see the finished product, Isozaki replied, “I have seen it. I saw it when I designed it. I saw it in my mind.”

1. The building has undergone major changes

Just like everything else in Disney over the years, the Team Disney Building has experienced change for both aesthetic and safety reasons.

Perhaps most noticeably, the reflective pools outside the building were removed. While they were meant to carry the peaceful, serene nature of the building out into the world, they were shallow and difficult to distinguish from the sidewalk and roadways when it rained. They have since been replaced with landscaping.

What’s more, employees noted that the subdued design seemed actually cold and uninviting. Perhaps this is a cultural difference, but Disney needed to remedy the situation, so they added Mickey artwork to soften some of the harsh edges.

Are you a fan of the Team Disney Building?  Ever been inside?