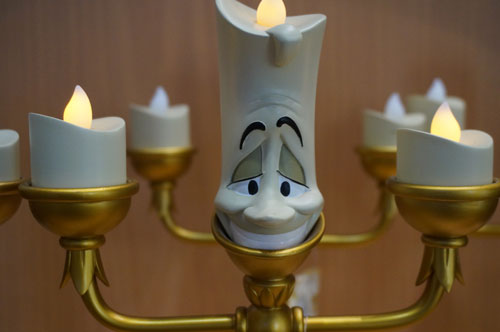 Are you a fan of Lumiere? I am.

Lumiere, which means “light” in French, is one of Beast’s best friends in the animated Disney classic “Beauty and the Beast.”

Lumiere has a special charm and is a smooth talker even when he is being rambunctious. He is also quite a lady’s man. Lumiere has a beautiful girlfriend Fifi (the feather duster) and is usually the one who gives Beast himself useful advice on how to woo Belle. It was Lumiere who gave Beast the idea to give the castle’s library of books to Belle, which was a great idea since Belle loves books.

On top of all those wonderful characteristics Lumiere can sing! He sings one of the most famous show-stopping tunes in the movie, “Be Our Guest.”

The part of Lumiere was provided by Jerry Orbach from the time Beauty and the Beast was released in 1991 until Orbach’s passing in 2004. From that time on, Jeff Bennett has provide the voice for Lumiere.

Did you know that Lumiere has made quite a few appearances outside his debut appearance in Beauty and the Beast? You can see him in these places too:

Beauty and the Beast: Live! stage show and Fantasmic! at Disney’s Hollywood Studios

This Lumiere figure operates on batteries that power his softly glowing flames.

This sweepstakes ends October 24, 2014, so be sure to enter, share your entry with your friends, and encourage them to enter too. It will be a fun way to increase your chances of winning, and give your friends a chance to win too.

You can buy your own Light-Up from Amazon using this link.