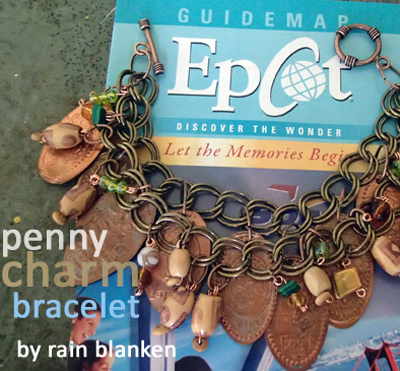 In my last post here on World of Walt, I ranted quite thoroughly on the merit of Walt Disney World pressed coins. They’re collectible, durable, and one of the cheapest souvenirs on property.

The only ‘problem’ I can see with a pressed coin as a souvenir is in the very nature of a coin… it’s small. What do you do with it? People often won’t even pick up pennies off the street. So what do you do with this smashed bit of metal with Ariel’s face on it?

Disney sells penny collecting books, which are great if you are trying to keep track of what you’ve got in your collection. But I’ve got a better way to keep them on-hand.

You see, I’m one of those ladies that walk into the World of Disney store in Disney Springs and just kind of stand in front of the jewelry counters. There I am, in the way of real customers making legit jewelry purchases, drooling over gemstones and precious metals. I want Disney jewelry. I just can’t justify it after I spent all that money on Disney clothes, Disney hats and Disney sushi.

Fortunately for fate, there happens to be a penny machine right next to the jewelry counter. As I rummaged in my change purse while gaping at a single $65 Chamilia bead, the space above my head lit up like a light-bulb in WALL-E’s adorable metal hand. I was going to put my thriftiness to work. If pressed coins are my ideal WDW souvenir, and I’ve got all these bare wrists to cover, then by-golly, it’s time to literally crank out my own couture.

If you’re using Walt Disney World pressed pennies, chances are, you’re a fan of a theme. Plot a theme for your bracelet that pays proper tribute to an afternoon or even your entire week at Disney. I chose to use pennies from my day at the Epcot Flower and Garden Festival. My design includes pennies from the World Showcase pavilions, favorite characters, and one from the Contemporary, which we visited that morning. What theme are you going to create?

Choose some beads to go with your pennies. I picked some glass and wooden beads. The natural materials and glimmer is a look that I can take from a morning at Animal Kingdom to an evening at Hollywood Studios.

My jump rings, toggle clasp and chain are in bronze and copper colors, but you don’t have to do this. Go silver, gold, or whatever looks good with your design, especially if you’re using pressed dimes and quarters. 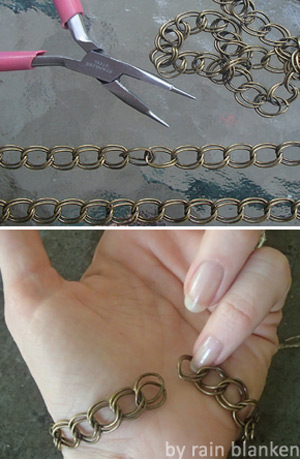 Wrap the chain around your wrist to measure out your bracelet. I like to go up on the palm a bit to allow for some breathing room. You should at least leave enough extra chain to fit a couple fingers underneath. My design uses two chains, one slightly longer than the other, but if you aren’t feelin’ it, just use one… or three! The world is your oyster.

I’ve found through trial and error that a hammer and nail is far superior than a drill when it comes to putting holes in coins. Since we’ll be driving the nail right through the penny, you need to be working on a surface that you don’t mind putting some holes in. My garden table is no stranger to taking a beating, but was merciful and clamped a piece of scrap wood to it. 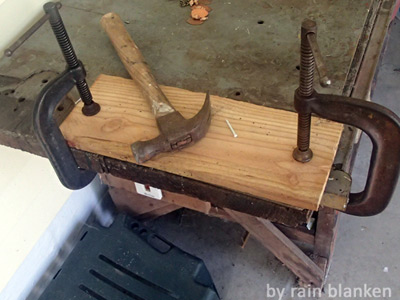 Clamp your first penny to the work surface, using a small piece of felt or thick cloth in between the clamp and the penny. This will keep the clamp from scratching up your precious.

Center the point of the nail at the top of the penny, but stay at least an 1/8” from the edge to account for the girth of the nail. Carefully tap at the nail with the hammer, then pound harder as the nail settles in and becomes more stable. Submerge the nail just enough to make the hole. If the tip of your nail smashes instead of penetrating the penny, then that means your nail isn’t steel. Go back to the garage and try again. 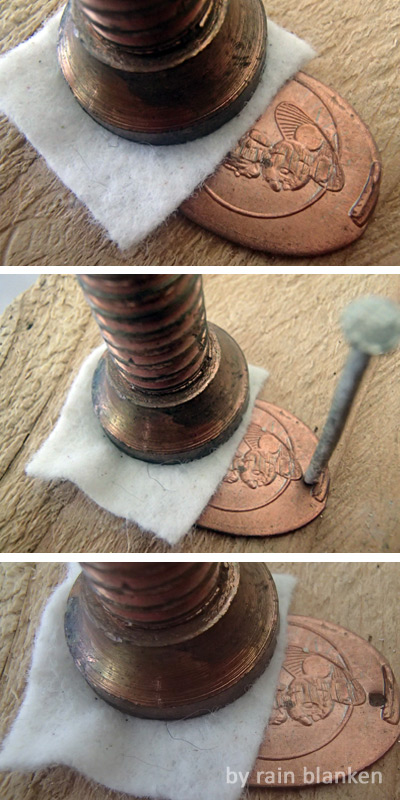 Once the nail is through, pull it out and flip the penny over. Wow, that hole looks like a mess on the other side. Most likely, it doesn’t look like a hole at all. Position the nail over this blowout and hammer it in again. This should make the hole more defined. Continue like a little dwarf in a mine, flipping your coin and hammering until you’ve got a clear hole in the penny. Hi ho, Hi ho… It should only take a couple passes. Pound down the fly-away flaps of metal with the hammer to finish. 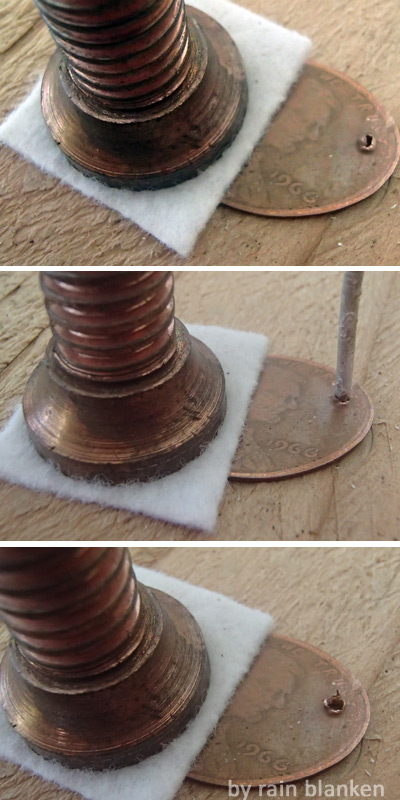 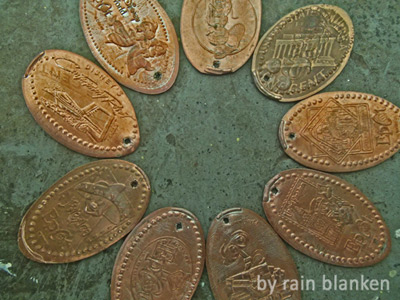 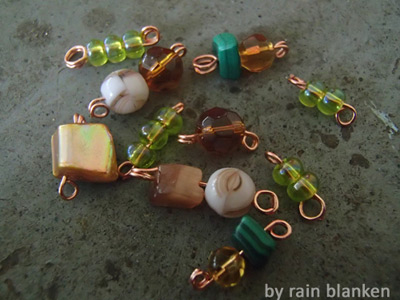 I’m going to show you two ways to turn beads into charms. 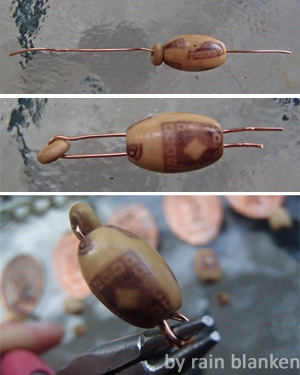 For the first method, you’ll need a small bead and a large bead.

• Clip a piece of jewelry wire that is three times as long as your beads.

• Thread the small bead to the middle of the wire.

• Bend the wire in half.

• Thread the large bead over the two ends of wire.

• Curl the ends to make a loop and tuck the ends right into the bead. 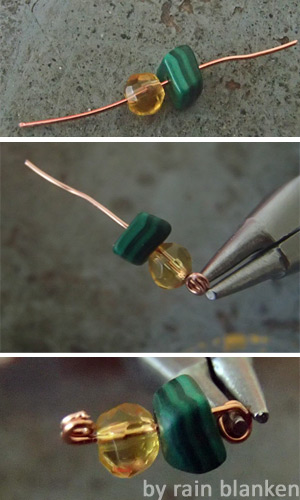 For the second method, any size or amount of beads will work.

• Cut a piece of wire four times as long as the bead(s) you’ll be using.

• Thread the bead(s) to the middle of the wire.

• Curl one end of the wire into a tight circle. This should be large than the hole on the bead.

• Curl the other end into a slightly larger circle, one you can attach your jump rings to. 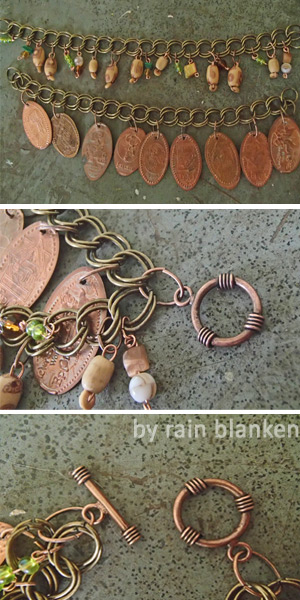 Use the jump rings to arrange your pressed pennies and beads on the chains. I put the beads on one chain, and the pennies on the other. This gave my bracelet a nice layered look.

Be sure to use jump rings that allow plenty of movement. If your charms aren’t freely dangling, then the jump rings are too small, and will be prone to breaking off.

If you are following my two-chain design, use a large jump ring to attach the two chains. Make sure that the chains are not twisted, or the beads will lay funny and the chain could eventually break.

Toggle clasps are so easy. Just attach each end of the clasp to the bracelet with a jump ring. If you did the two-chain design, use the same large jump ring that joins the ends of the chains together. 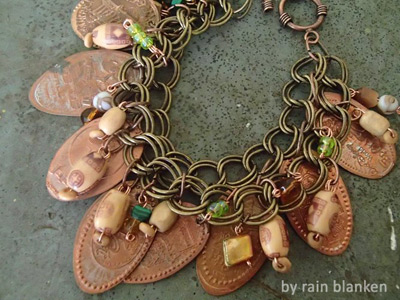 That’s it! You’ve got a really cool Walt Disney World bracelet made of quality metals issued by the U.S. Treasury. It’s not exactly a rhinestone poisoned apple from the Disney Couture line, but it looks pretty darned good and we made it ourselves.

Once you know how to properly get the holes in the pressed coins, you pretty much have limitless possibilities. I’ve also put two holes in my pressed pennies. With a hole in each end, you can create a quick pressed penny chain bracelet. I’ve even attached pressed pennies to leather bands for a men’s look. Try ribbons and different beads to make bracelets, necklaces, and even earrings out of your pressed pennies.

Have questions? Did a step confuse you? No worries, I’m a confusing/confused person, so that was probably my fault. If you need help with this tutorial, ask me on Facebook. I’d be happy to assist, and I’d love to see your finished bracelets!

What do you think about his pressed penny project?