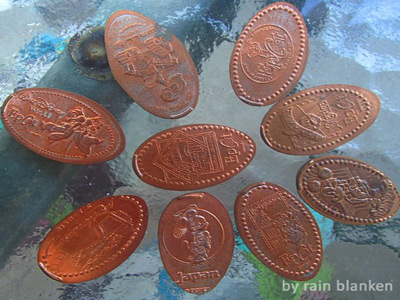 Why Pressed Pennies Are The Best Souvenir From Walt Disney World

We shell out so much cash on souvenirs so that we may have a token to remind us, in our non-fast-passed or magically-expressed lives, that Walt Disney World is still out there; right now, it is churning out new breathtaking memories and awaiting our return. Our souvenirs are designed to snatch up those memories from the recesses of our busy brains and take us to a place of wonder in the midst of our mundane every-day.

But are all souvenirs created equal? Certainly not. As much as that resort-refillable mug and I bonded on our trip, you can bet I’m unceremoniously chucking it in the recycle bin after one-too-many rounds through the dishwasher. How about the new Minnie-Ear headbands? The mini top hats are cute, but I can’t tell you how many times my daughter has asked me to sew the stuffed ears back into place. Okay, it was twice, but, c’mon. That’s too many times for a headband I dropped $30.00 on last year and guarded like the Shroud of Turin while we navigated the parks. Don’t crush it! Don’t get the feathers wet! Gah!

To spare at least my own sanity (the girl is on her own), during our last visit to WDW, I chose to dedicate my personal souvenir budget to pressed pennies. I wanted to remember a day at Epcot’s 2013 Flower and Garden festival. For the first time, the festival featured food carts just like at the Food and Wine festival, so you know I spent my day in World Showcase, eating my way around the world. Take my word for it; topiaries are infinitely better after a mini-plate of ‘frushi’ from Japan and a Rosita margarita from Mexico. Shrubbery Hook never looked so appealing.

As I wined, dined, and cranked penny machines, I told myself that the price was a good investment. Sure, you’re actually paying to destroy your own money, but, pound-for-pound, pressed pennies make one of the smartest souvenirs, and that’s not just the margarita talking.

They’re often overlooked, but just think about it:

By the time my husband steered me away from a second ginger and tea trifle in the United Kingdom, I had disposed of my quarters and gained a purse full of flattened copper Disneyana;  but, as my husband was too nice to say but was certainly thinking, “What is she going to do with those things?”

Right off the top of my head, I thought magnets. You can buy strips of magnetic tape at the craft store, slap it on the back of a pressed penny, and, boom, $.51 magnet from Walt Disney World. I’m not the type to stop there. Known for turning junk into jewelry on About.com, I had to go the extra mile with this one.

Fortunately, I had a vision while the World of Disney jewelry counter had me hypnotized. No, it wasn’t the one where I’m wearing all of the jewelry at once. Wait, let’s soak that one in:  you know, the gold is really heavy and not all of the rings fit, but I think we could manage this look, right? After that vision passed, I figured out what to do with all of my souvenir pennies.

I’m going to literally crank out my own couture, and so can you. Next time, I’ll show you how to make a unique charm bracelet using the pennies you’ve collected from Walt Disney World. It’s a metal and bead beauty that will look like it came from the Disney Couture collection without costing you a meal at Yak & Yeti.

Have you collected pressed pennies from Walt Disney World?