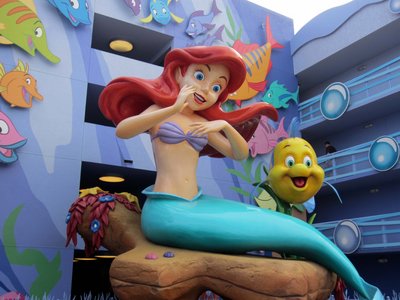 On Saturday, September 15, 2012 the fourth and final section of Disney’s Art Of Animation Resort opened – themed after the 1989 smash animated hit The Little Mermaid.

Like the Cars section and the Finding Nemo section, the new Little Mermaid section has a pool in the center of the buildings (only The Lion King section of this resort doesn’t have its own pool). The pool is called Flippin’ Fins, a reference to the “Part Of Your World” song from the movie.

Unlike the other wings in the resort, The Little Mermaid section is made up of standard rooms instead of family suites. Also, the entrances to the rooms are from outside walkways and balconies instead of inside hallways. In this way, The Little Mermaid section is unique from the rest of Disney’s Art Of Animation Resort, but is more like the other Disney Value Resorts like Disney’s Pop Century Resort (which is just a short walk across the bridge on Hourglass lake) and the All Star Resorts.

Like all the other value resort, The Little Mermaid section has huge icons from the movie. Let’s take a look.