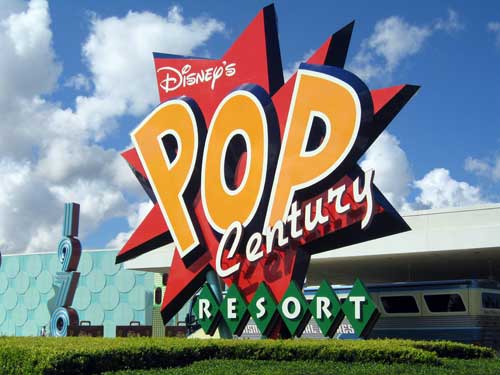 This value resort, the fourth value resort on Disney World property, sits just southeast of Disney’s Hollywood Studios and across the road from the ESPN Wide World of Sports Complex. In terms of number of rooms, this is the largest resort in all of Walt Disney World. In fact, “go big or go home” could be the unofficial motto of this expansive complex. From the abundance of rooms to the six-story bowling pins, Pop Century is an outsized adventure.

Finding Your Way Around

The Pop Century experience begins at Classic Hall, the main building with the check-in counters, concierge, food court and shopping, and arcade. After passing through Classic Hall, you will find yourself facing a flowery pair of buildings representing the 1960s, and the Hippy Dippy pool. In addition to flowers, giant yo-yo’s and Play-Doh also represent the ‘60s.

To your right you will be able to spy the towering bowling pins that decorate the corners of the three 1950s buildings. The ‘50s also has a giant jukebox and large dancing figures boogying to the earliest rock and roll hits. Disney has also included statues from the classic 1955 animated film Lady and the Tramp.

The decades progress as you head to the left from Classic Hall. A four-story Big Wheel tricycle, a giant foosball game, and staircases representing an eight-track tape player bring the ‘70s to life. The ‘80s have the Rubik’s Cube, Michael Jackson, the ever-hungry Pac-Man, and Mr. Potato Head. The ‘90s have the smallest area with only one building, but the cellphone staircases, floppy disks, and rollerblades are unmistakable emblems of this decade.

The resort backs onto Hourglass Lake, and original plans for the resort called for an expansion of Pop Century across the lake to celebrate the decades between the 1900s and the 1940s. Instead, the land across the lake was turned into a separate Disney Value Resort – Disney’s Art of Animation Resport.

Pop Century offers similar amenities to the other Disney value resorts, but it has more of them. These amenities include three swimming pools, two playgrounds, and two pool-side bars. It also has a large video game arcade and a large shopping and dining food court.

There is a concierge on duty in the main building near the check-in desk. Valet dry cleaning and laundry is available, and guests may also use coin operated washing machines. Each room has cable television featuring Disney programming, and high speed wireless internet is available for an additional fee. Refrigerators are also available for an extra fee, although microwaves are not.

The flagship of Pop Century’s three pools is the huge, flower-shaped Hippy Dippy pool in the middle of the two buildings dedicated to the ‘60s. All around this pool, the colors and shapes of the deck chairs, umbrellas, and giant showers pay tribute to the era of flower power. As the largest pool, Hippy Dippy is usually loud and crowded with guests beating the Florida heat. The resort’s only kiddie pool is next to the Hippy Dippy pool.

A smaller pool in the distinctive shape of a bowling pin sits between the 50s rooms. A bit farther from Classic Hall and the other decades, this pool is generally quieter and less crowded than the Hippy Dippy pool. You can enjoy the comparatively calm waters of the Bowling pool while giant silhouetted figures dance the sock hop on the surrounding buildings. This pool area does not offer a kiddie pool.

Even farther from the heart of the resort is the Computer pool. Like the Bowling pool, this is a smaller and quieter place to swim than the Hippy Dippy pool. In keeping with the giant icons of quaint electronics that decorate the ‘90s rooms, the Computer pool is in the shape of an old fashioned computer monitor.

For breakfast, lunch, or dinner – or all three – head over to Classic Hall to visit the Everything Pop Shopping and Dining food court. This food court has seven quick service stations where guest can order a variety of American food standards. Options include several soups and salads, burgers and sandwiches, pasta and pizza, and a few “ethnic” selections such as shrimp lo mein.

Also in Classic Hall is the Classic Concoctions bar, where adults can order specialty cocktails or other beverages. A second bar is pool-side at the Hippy Dippy swimming pool. A drink from the Petals Pool Bar is a great way to kick your relaxation up another notch. Both bars also serve food, although typically snacks rather than full meals.

Getting to the Parks

The best way to get from Pop Century to the Disney World theme parks is by bus. Pop Century has its own bus service that does not stop at any other resort, unlike the All-Star Resorts that share one bus line between the three of them. Even so, the size of the resort means that there will still be lines for the buses in the mornings when everyone is headed out to the parks.

The trip to nearby Hollywood Studios and Epcot is very short, and the Animal Kingdom trip is not much longer. The ride to the Magic Kingdom at the opposite end of the Disney World resort can take around 20 minutes.

The fun and colorful design of Pop Century has helped to make this a very popular family resort. Although children and young adults may not be very familiar with many of the toys, catch phrases, and other images of the five decades, the icons are so visually entertaining that it doesn’t seem to matter.

The most notable “value” factor of Pop Century is the relatively small rooms. Past guest say that while the rooms can officially sleep four, that many people can give the space a cramped feeling. Although this is a beautiful resort with many activities, it is still best for guests who do not plan to spend extensive time at the resort and in their rooms.

One of the Best Value Resorts

In general, visitors seem to agree that Pop Century is one of the best, if not the best, Disney Value Resort. It has the advantage of being newer and larger than the All-Star resorts, and as a result everything is a bit shinier and there is more for guests to explore. Smaller families on a budget are likely to have a great experience here.

Are you a fan of Disney’s Pop Century Resort?