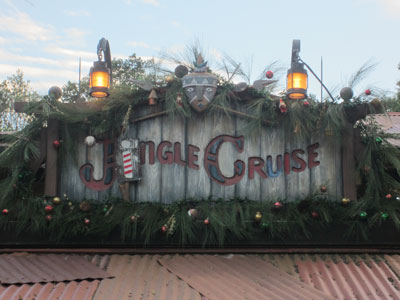 Disney let the world know in late October 2013 that they would transform the classic Adventureland attraction The Jungle Cruise into The Jingle Cruise for Christmastime.

The story behind the idea is that the cruise skippers have become homesick. They have decided to decorate their surroundings to create some holiday cheer.

The changes in this overlay include a new holiday “radio broadcast” in the waiting queue that includes plenty of Bing Crosby tunes that fit the era of the ride. You will also see plenty of Christmas lights and decorations in the queue. Some skippers wear Christmas caps themed to the jungle.

You will also see that the boats have new, temporary names. For example, the Amazon Annie has temporarily become the Eggnog Annie, and the Mongala Millie is now christened the Mistletoe Millie.

There are no changes to the ride props or layout itself. You won’t find Santa hats on the elephants or tigers. That probably makes sense as the skippers could decorate their own surroundings, but couldn’t very easily decorate the animals in the jungle.

However, the skippers do have a new spiel with plenty of corny Christmas-themed jokes. Check out the video below for the new type of bugs that have inhabited the forest for the season.


Short video showing some of the queue and the start of the ride.

Should Disney decorate the Jungle Cruise Forest for Christmas too?