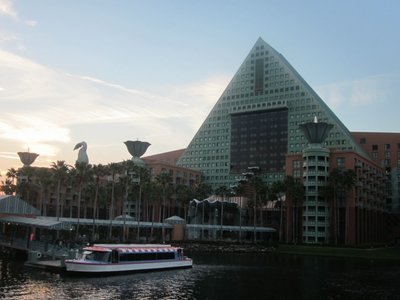 So what is it that doesn’t fit?  Well, one isn’t a hotel at all (hint – it’s a campground) and the other two aren’t owned directly by Disney.  So, that’s why we have a category of “other”.

Maybe you want to stay near the Magic Kingdom – thoughts of giving Mickey Mouse a hug and admiring Cinderella’s Castle seem like a dream come true.  But maybe you are on the most limited budget possible, and yet you want to stay on Disney property.  Or, maybe you have a recreational vehicle – your own home on wheels.  If any of these things sound like you, then the Campsites at Disney’s Fort Wilderness might just be for you.  For campsites, they are especially nice.  They have a level pad for your tent or RV, nearby comfort stations (meaning community bathrooms with showers) have much-welcomed air conditioning, and there are shops and restaurants nearby.

The Walt Disney World Dolphin has a style and elegance of its own.

First, they don’t look like most other Disney World hotels.  While most Disney properties represent a certain time and place – like the south seas at Disney’s Polynesian or the grandeur of the Victorian era at Disney’s Grand Floridian, the Dolphin and Swan aren’t like that at all.  Instead, they tell a more abstract story through architecture.

Also, these hotels aren’t directly owned and operated by Disney itself.  Instead, they are run by Sheraton.  You still get great service and access to the same guest perks as other Disney hotel vacationers – like free transportation around Disney property and early and late admission to theme parks.

Finally, you might just be able to use your Sheraton reward points to book your stay, and there is nothing like that at other Disney hotels.