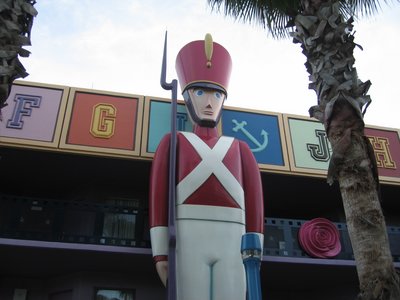 You may want that special Disney magic throughout your entire vacation – not just while you are in the Disney parks, but also in the early mornings and late evenings too.  However, you weren’t born independently wealthy, and you would still like to be able to retire someday – so you can’t spend a small fortune on your Disney World vacation.  Plus, you figure most of the time you will be in the theme parks – so while you would like to stay in a Disney resort hotel, you just can’t see paying a small fortune for it.

If all this sounds a bit like you, then Disney’s Value Resort Hotels might just be for you.  They have all the things you would expect from Disney – great service, fun themes, and terrific locations.  But they don’t have the big price tags like the Disney’s Deluxe Resort Hotels.  And while they might not have the high end amenities like spas or super fancy restaurants, you might not really want those things anyway – or at least you don’t want to pay for them these days.

Where Are The Value Resorts Located?

The value resorts don’t quite have the geographic coverage as the more expensive Disney hotels.  Three of them are clustered together near Disney’s Animal Kingdom.  And since they are a bit more removed, it will take a little longer for you to use Disney transportation to get to the theme parks and attractions.  However, think of that travel time – where Disney does the driving for you, for free – as extra relaxation time.

Disney’s All-Star Movies Resort is where you can literally step into the movies, from Herbie The Love Bug (you’ll remember that if you were a kid in the 1970s) to Fantasia.  Huge icons take you back to fond memories of classic Disney films.  Several swimming pools, a huge food court, and a basic room service that includes pizza deliver makes this a great place to crash after a fun day at the parks.

Disney’s All Star Movie Resort brings the movies to larger-than-life.

Disney’s All-Star Music Resort is the place for you if you love Broadway, calypso, and jazz.  Many different styles of music are represented with huge icons in a place fit for music lovers.  Like all the value resorts, rooms have outside entrances, and you have access to pools and a food court.

Disney’s All-Star Sports Resort is for you if you always wanted to be in the NFL or the NBA, but didn’t quite have the height, weight, or – well – talent to make it.  Check out the huge icons of helmets, hockey sticks, and even Coke cups.  Sports fans will love it.

Disney’s Pop Century Resort celebrates the last half of the twentieth century, decade by decade.  From the fun of doo-wop and bowling in the 1950s to the Rubik’s cube in the 1980s, anyone who was alive and conscious for some part of 1950-2000 will have a great time remembering the fun – and sometimes in retrospect – silly trends and ideas that defined our popular culture. 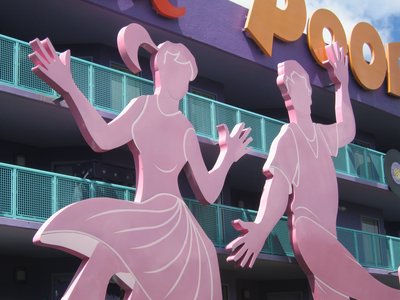 Disney’s Art of Animation Resort might be right for you if you love the classic Disney and Pixar movies like Finding Nemo, The Little Mermaid, and The Lion King.  Many of the rooms in this hotel are family suites, meaning they have a separate master bedroom, two bathrooms, and an Inovabed.  What is an Inovabed?  Don’t worry, I had to look it up too.  It’s what we used to call a Murphy bed in the old days – a bed that folds up into the wall when not in use to provide more floor space.  If you need extra room for an extended family, you enjoy togetherness, and you don’t want to pay for separate rooms, this resort might just be the right choice for you.