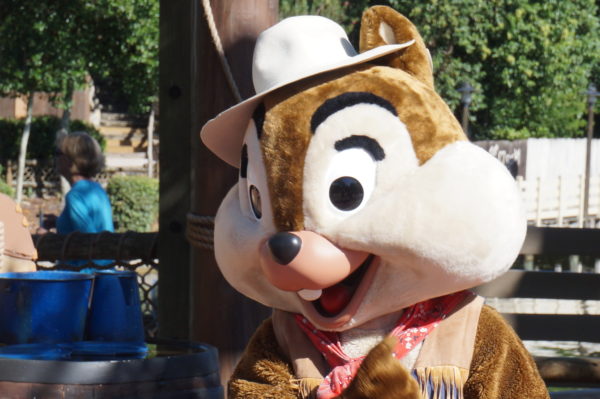 Chip from Chip and Dale in Frontierland

No more Straws and Stirrers

Disney says they will eliminate plastic, single use straws and coffee stirrers from all of their parks around the world over the next year. When this happens, Disney will single-handedly reduce the use of plastic straws by 175 million and coffee stirrers by 13 million.

Besides straws and stirrers, Disney says that they’re going to discontinue the use of polystyrene cups.

Other Single Use Products

They also plan to immediately reduce the use of other single-use products and ultimately eliminate their use completely.

A significant single-use product is shopping bags. Disney will soon start offering reusable bags for a nominal fee, or you could refuse the bag all together. However, I think a reusable bag would be a really cool souvenir! That might make weekly grocery shopping a little more magical!

Disney will also switch to refillable toiletry items. Instead of individual bottles of shampoo and conditioner, they say that they’ll place refillable containers in the Disney resort hotels.

Since 1995 when the Disney Conservation Fund was founded, Disney has effectively reversed the decline of wildlife species around the world with more than $70 million donated to date.

They’ve reduced net greenhouse gas emissions by 41% and diverted nearly 50% of their waste from landfills.

Their long-term goal is to have zero greenhouse gas emissions, zero waste, and conserve as much water as possible.  That’s an ambitious goal.

The elimination of straws by mid-2019 is not a new idea for Disney. When Disney’s Animal Kingdom opened in 1998, they made a decision to not provide plastic lids or straws anywhere in the park. It’s not only because it hurts the environment, and the park’s goal is conservation education, but it’s also dangerous to animals if the straws end up in their enclosures. If you really must have a straw, Animal Kingdom dining locations offer paper straws.

Starbucks has recently said that they plan to eliminate straws and coffee stirrers from their locations around the world. Since there are several Starbucks locations in Disney World.

What will this mean when it comes to cups? If Disney is trying to eliminate single use cups, what will they be replaced with? Maybe Disney will require guests purchase something similar to the concept of the refillable resort mug?