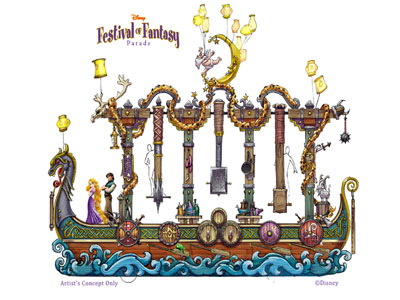 On April 26, 2013 Disney held a press event for their “Monstrous Summer” promotion that is coming this summer to promote the upcoming Monsters University movie which will be released into theaters on June 21.

And while it really doesn’t seem to have much of anything to do with Monsters Inc. characters, Disney used the opportunity to announce a new parade for the Magic Kingdom. Disney will replace the current Magic Kingdom daytime parade, called “Celebrate A Dream Come True,” with a new parade called the “Disney Festival Of Fantasy Parade.”

The parade is set to debut in 2014 – at about the time that Disney finally finishes the massive expansion of New Fantasyland and the hotly anticipated Seven Dwarfs Mine Train family-friendly coaster.

Let’s take a look at some of the concept art for the new parade:

What do you think about this new parade?