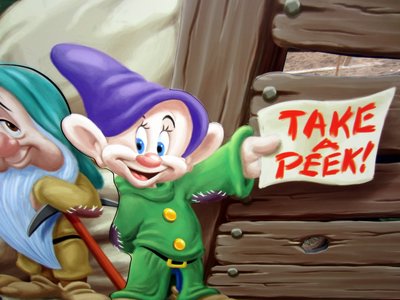 There is plenty to see in the newly expanded section of Fantasyland in the Magic Kingdom – ranging from fun includes the bright colors of Storybook Circus, the participation event that is Echanted Tales With Belle, the antlers of Gaston’s Tavern, the unique merchandise in Bonjour Village Gifts, and of course the magical Journey Of The Little Mermaid.

But one signature, E-Ticket attraction smack dab in the middle of it Fantasyland is still under construction – the Seven Dwarfs Mine Train.

Disney closed the original Snow White’s Scary Adventures on May 31, 2012 and will install the Princess Fairytale Hall in its place. But Snow White won’t be gone for long – we will see her again in the Mine Train ride.

The Seven Dwarfs Mine Train will be a roller coaster made of steel and is built for Disney by Vekoma Rides Manufacturing, a roller coaster and attraction design company based in the Netherlands. Interestingly, this is the same company that designed and built Expedition Everest in the Disney’s Animal Kingdom theme park and also the Rock ‘N Roller Coaster in the Disney’s Hollywood Studios theme park. However, the Mine Train will not be a thrill ride like those other coasters. Instead, this coaster will be less intense as it travels inside and outside the mountain that will be its home. It will also have a new ride system that will sway as a mine car would.

Disney has posted several different pieces of concept art around the construction walls of the new ride. Let’s take a look at what we will see when the ride opens in 2014:

What do you think about the Seven Dwarfs Mine Train concept art?