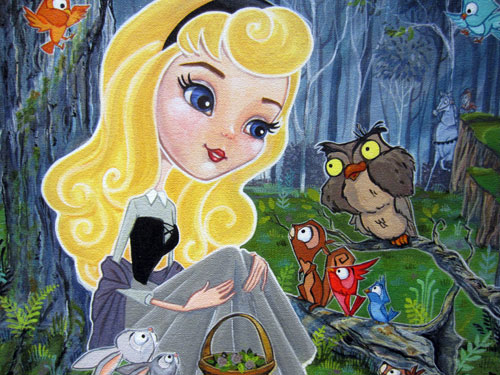 See Amazing Artwork From The Art Of Disney Store

While there are plenty of places around Disney property that you can find all types of art featuring Disney characters – from simple postcards to original painted works, The Art Of Disney stores in particular carry some nicely done, high-end artwork that grown-up Disney fans will enjoy.

If you venture into one of these Art Of Disney Stores, you should be careful in two ways:

1 – Keep a close eye on any small children. There are plenty of beautiful, expensive, and delicate figurines and other collectibles. You know the old saying – if you break it, you buy it.

2 – Keep a close eye on your wallet. If you are a Disney fan, you will probably fall in love with many items, and that could be expensive.

With all that in mind, let’s take a look at some giclées that are available at the Disney Springs location. (Note that there isn’t necessarily a commonly accepted definition for a giclée, but generally speaking it is a high quality ink jet printing).

John is an artist who works for The Disney Company in southern California.  He has a very unique style.  He has shown his art at the Disney Springs Festival of the Masters in the past.

According to sources, Alex is an artist, sculptor, designer and Disney Historian, and has been a fan of all things Disney since kindergarten.  He tried for years to get a job at Disney, and eventually moved his family to Orlando to pursue that dream.  He is an artist with the Disney Design Group.

There is amazing artwork for sale all around Walt Disney World.  These are just a few of the unique pieces that were for sale in The Art of Disney store in Disney Springs.  We will look at other art in the future.

Do you like the Disney art sold in the parks?