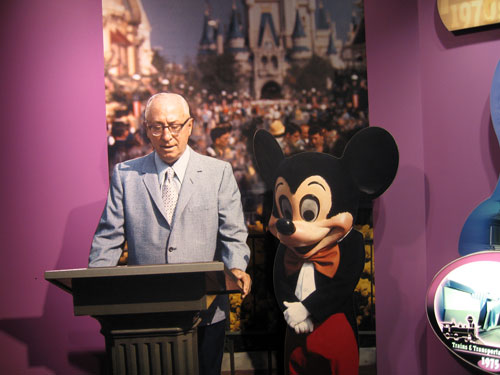 A Legacy of Leaders: Disney CEOs Through the Years

Walt and Roy Disney worked closely together even as children. In 1911, when Walt was just 10 years old, Roy, who was 18 at the time, bought a newspaper route. Roy hired his brother to deliver papers with him.

When he turned 18, Walt started as a commercial illustrator. In 1923, he joined his brother Roy in Los Angeles, and they built their own kit houses side by side on Lyric Avenue; together, they founded Disney Bros Studio there.

In 1927, Walt and his chief animator and friend Ub Iwerks created Oswald the Lucky Rabbit. When Charles Mintz got control of Oswald with a legal loophole, Disney and Iwerks created Mickey Mouse in 1928 with some suggestions from Lillian Disney, Walt’s wife.

A History of Innovation and Risk-Taking

During his life, Walt achieved many things. He became a pioneer of animation and was awarded several accolades including 22 Academy Awards and 59 nominations, 2 Golden Globes, and 1 Emmy. He also received more individual Oscars than anyone else. Many of his films are included in the National Film Registry and the Library of Congress.

With his success, Walt opened Disneyland in 1955 and created the Mickey Mouse Club, a TV show, to fund his venture. He began working on Disney World, his plan for an East Coast park, in 1965. Unfortunately, he never saw his dream become a reality. Walt was President of Walt Disney Productions until he died from lung cancer in 1966.

People who knew Walt well say he was a shy and insecure man in private, but to the public, he was a warm and personable figure who exuded confidence and business savvy. His company has been successful for the better part of a century because he laid a strong groundwork.

Let’s take a look at who succeeded Walt in the leadership of the Walt Disney Company, as it’s known today.

Roy, Walt’s brother, was named CEO in 1929, but it didn’t become official until two years after Walt’s death. Roy co-founded Walt Disney Productions after a series of other jobs including a bank clerk at First National Bank of Kansas City.

From 1917 to 1919, Roy served in the US Navy but was discharged when he contracted TB. He then moved to LA and returned to the banking industry. After a failed attempt to join the army at 19, Walt moved to LA, too.

Roy was mostly in charge of the financial part of the studio while Walt was more of the creative one. Although they co-founded the company, Roy was almost completely bought out by Walt by 1929.

Still, he stayed with the company and became the first CEO. When Walt died before Disney World could be completed, Roy postponed his retirement to finish the park, which he named Walt Disney World as a tribute to his brother.

After Walt Disney World opened in October 1971, Roy finally retired. He died of a seizure just two months later on December 20th, 1971 and is buried at Forest Lawn-Hollywood Hills Cemetery.

Tatum was a Senior Executive for the Walt Disney Company for 25 years and played the role of CEO from 1971 to 1976- the first non-Disney family CEO. He served simultaneously as President and CEO until Card Walker took over as President in 1972. He was instrumental in helping Roy with Walt Disney World Resort, Epcot Center, and Tokyo Disneyland. After being CEO, he remained an integral part of the Disney Company serving as Director until his retirement in 1992 and then as director emeritus until his death.

In 1993, he passed away from cancer. As a tribute, Michael Eisner (CEO) and Frank Wells (President) said that he would be missed for his “…wisdom, guidance, and balance.”

E. Cardon “Card” Walker graduated from UCLA and started at Disney in the mailroom in 1938. Before serving in the US Navy in 1941 as a Flight Control Officer, he had worked his way up through the ranks in the camera department and as a unit manager for short subjects. He saw eight major battles between 1943 and 1945 but returned to Disney as the Vice President of Advertising and Sales in 1956. In 1960, he was elected to the Board of Directors, and in 1966, he became the Executive Vice President and Chief Operating Officer.

Walker was President from 1972 to 1977, a time that overlapped with his CEO duties from 1976 to 1983. Although he officially ended his CEO duties in February, he remained on the board until May to oversee the completion of Tokyo Disney.

Even though his time was relatively short, Walker made some major contributions to Disney. Besides establishing an international presence in Tokyo Disneyland, he helped with the development of Walt Disney World and Epcot Center. He also founded Disney Channel in 1982.

Altogether, he spent 50 years on the board. For his service, he was honored as a Disney Legend in 1983.

Ron W. Miller was Walt’s son-in-law. Ron married Walt’s daughter Diane after meeting her on a blind date at USC. Miller wasn’t a popular choice as CEO. As a former NFL player for the LA Rams, many people looked at him as a dumb jock.

Miller was drafted into the US Army in 1954. He started his stint in the NFL after his time in the service, and Walt was afraid that he would become injured after seeing him play only twice. Walt proposed that he come work for him at the Disney Company, and some people thought he just got lucky to have married someone with such connections in the entertainment industry.

Miller first worked as a liaison between WED Enterprises (now the Imagineers) and Disneyland. In 1957, he served as the second assistant for Old Yeller, getting the job with a little help from Walt of course.

Miller did, however, make some significant contributions to the Disney Company. Besides serving as CEO from 1983 to 1984, he created the Touchstone Label, which allowed Disney to make films for adults without ruining the family-friendly brand Disney had created. He also established Disney Channel as a brand and made the first attempts at computer animation.  In many ways, Miller set the stage for Disney’s future success.

Despite these accomplishments, Miller was removed from his position by way of the “Save Disney” Campaign launched by Roy E. Disney and fellow shareholders Stanley Gold and Sid Bass.

In 1976, Lillian Disney along with her daughter and son-in-law purchased two vineyards in Napa Valley and opened Silverado Vineyards Winery in 1980. To this day, he still works the winery and doesn’t speak much about Walt Disney except to support Diane’s efforts to preserve Walt’s legacy. However, he did get producing credits on movies like Pete’s Dragon, Escape to Witch Mountain, and Inside Out.

As I mentioned above, Miller wasn’t a favorite especially amongst shareholders Sid Bass and Roy E. Disney, Roy O.’s son. In a ploy to strengthen the company, the two joined together to replace Miller with Michael Eisner as CEO and Chairman of the Board and Frank Wells as President.

Eisner served as President and CEO of a rival studio, Paramount Pictures from 1976 to 1984, and also worked at NBC and CBS. With Paramount, he oversaw successes including Saturday Night Fever, Grease, Star Trek, Raiders of the Lost Ark, Happy Days, Laverne & Shirley, Cheers, and Family Ties. That’s a long streak of wins.

When Eisner was passed over for Chairman, he left to join the ABC family as Assistant to the National Programming Director then as Senior Vice President of Programming and Development.

The 90s were set to be The Disney Decade, and Disney started to make a comeback with successful films including the Who Framed Roger Rabbit series and The Little Mermaid. Disney also acquired ABC and ESPN during this time. Disney’s Hollywood Studios opened in 1989, Disneyland Paris opened in 1992 joined 10 years later by Walt Disney Studios Park, and Disney’s California Adventure opened in 2001. However, these were only a few of the things Eisner promised, and the Board of Directors wasn’t happy with his performance.

After a takeover attempt that resulted in 43% of shareholders refusing to reelect Eisner in 2004, he stepped down on March 13, 2005, one year before his contract expired. The crux of the concern started with Roy E. Disney who left the company citing micromanagement. He said that Disney had become a soulless company; that certainly wasn’t what his uncle would have wanted!

Regardless, Eisner was honored with a star on the Hollywood Walk of Fame in 2008 and in 2012 with a Television Academy Hall of Fame induction.

Bob Iger served under Eisner as President and Chief Operating Officer from 2000 to 2005. He took over as CEO in 2005 when Eisner stepped down. With the mended relationship between Roy E. and The Disney Company, Roy was named Director Emeritus and remained a consultant for the company.

Iger started his entertainment career as a host of his campus news station and as a weatherman. He started at ABC in 1974 and became President of the company in 1989. When Disney purchased Capital Cities/ABC Inc., of which Iger was President and COO, the merger retained Iger as President. In 1999, Disney made Iger President of Walt Disney International, the division that handles international relations.

What’s more, Iger facilitated the acquisition of Pixar in 2006 for $7.4 billion. This all-shares transaction made Steve Jobs a top shareholder and led to Iger being named Director for Apple after Jobs’ death. The same year, Iger regained ownership of Oswald the Lucky Rabbit. This really impressed Roy E. as a show of commitment to honor Walt’s legacy and his work to continue the Disney Company as a tribute to him.

Under Iger’s leadership, Disney also acquired Marvel Entertainment in 2009 for $4 billion and Lucasfilm in 2012 for $4.1 billion, which resulted in Disney’s ownership of both Star Wars and Indiana Jones. He opened Hong Kong Disneyland, Adventures by Disney, Aulani, and the newest member of the Disney family, Shanghai Disneyland.

Iger isn’t only pleasing Disney shareholders, though. In May 2015, he was honored at the 25th Annual Broadcasting and Cable Hall of Fame for his vision and dedication to creative content and technological innovation. He has been the catalyst for the comeback of Disney movies and launched the billion-dollar MagicBand project of which Disney World is currently the only user. He was voted as the Best CEO and other variations thereof by Fortune, Forbes, Institutional Investor, Market Watch, and Chief Executive Officer Magazines.

Disney has seen unparalleled success with Iger at the helm, with stock raising fivefold during this tenure.  He stepped down as CEO in a surprise announcement on February 25, 2020.

The current and seventh CEO of the Disney Company is Bob Chapek, who was previously the head of Disney Parks, Experience, and Products.

Before taking over as CEO, Chapek orchestrated the largest expansion ever of Disney parks, including the opening of Shanghai Disneyland, nearly doubling the fleet of the Disney Cruise Line ships and huge investments in new lands and attractions at Disneyland and Walt Disney World.

Just as Chapek took over in early 2020, the COVID-19 pandemic hit, and the world turned upside down.  Chapek oversaw the company as it closed the theme parks, shuttered the cruise line, and laid off thousands of employees.  He also helped to navigate the company’s reopening, as well as the great results with the Disney+ streaming service.

Do you think the Disney company has the right leaders?