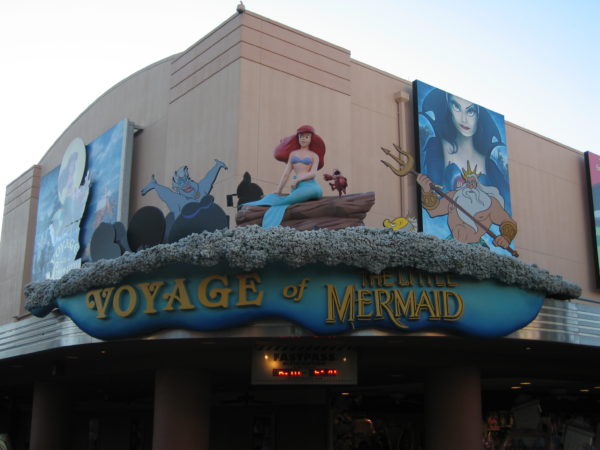 Some attractions in Disney World have been around seemingly forever. They have staying power because they are relevant and interesting across ages and genders and even generations. Voyage of the Little Mermaid at Disney’s Hollywood Studios is one such attraction.

This theater show opened way back on January 7th, 1992 while the park was still known as Disney-MGM Studios. The 14 minute show is based on Disney’s 1989 animated full-length feature film, The Little Mermaid, which earned just under $100 million dollars and was, by many accounts, a blockbuster film despite the fact that the producer had his early doubts being that the film mostly targeted the female audience.

As you’re approaching the theater, which is located in Animation Courtyard, you may see a crowd of people waiting outside. Don’t let this scare you away. As with most theater shows in Disney World, the wait is often only as long as the show lasts since there is a lot of seating inside.

Plus, this wait is a good thing because you have some time to enjoy the pre-show, which is a story in itself. The lobby has a nautical theme with fish nets, a shark, an old diver’s suit, and some other things that Ariel has either found or might see in her watery home.

Take your time to enjoy the scenery, but try to position yourself near the doors that enter the theater so you can get first dibs on seating. Choose a row, and let a few people in ahead of you. This should put you near the middle of the row for optimal viewing but not too far from the exit when the show is over.

Inside the theater, you’ll appreciate the air conditioning and the gentle mist from the sea as it sprays over you and the breeze filters through the air. Do you feel like you’re under water? Good! If you don’t want to get wet, sit towards the middle or back of the theater. This is also good advice if you have a little one; the stage is elevated and can be difficult to see from the rows closest to the front.

You’ll appreciate the padded seating and other creature comforts like the ability to remain in a wheelchair or ECV if you use one or the assistive listening devices that amplify the sound for those who are hard of hearing.

The show combines live action (real life) actors with puppets and colorfully costumed characters. Sebastian and Flounder are puppets controlled by actors dressed in black, and they’re joined on stage by over a hundred black-light ocean friends.

Ursula, the sea witch, is also a puppet but of a totally different kind. She is huge – 12 feet high and 10 feet wide and can be quite scary for young, impressionable children. She’s not meant to look friendly though, so the other, friendlier characters are supposed to even out her intensity.

The story itself is an abridged retelling of the movie. It starts with the Academy Award winning song “Under the Sea”. Sebastian, Flounder, and the other black-light puppets come on stage to sing this fun, upbeat tune.

Next, Ariel and Prince Eric perform “Part of Your World” followed by Ursula’s “Poor Unfortunate Souls”. Ursula then steals Ariel’s voice, but King Triton, Ariel’s father, saves the day as he kills the sea witch and gives Ariel her voice back along with permanent human form allowing Ariel to go with Prince Eric.

Throughout the story, scenes from the movie break up the live action and puppetry; guests love seeing clips from the original movie. This has lead to the staying power of The Little Mermaid.

The show ends with a curtain of falling water, and guests exit the theater near a gift shop. Don’t forget to pick up your Little Mermaid souvenirs!

If you’d like to see Voyage of The Little Mermaid but can’t make it to the parks, check out my Facebook Live Broadcast from November 18th, 2017.

If you like this broadcast, like World of Walt on Facebook and join me live most Saturdays to enjoy the parks from the comfort of wherever you happen to be!

Voyage of The Little Mermaid at Hollywood Studios:  Keeper, or Time To Replace?