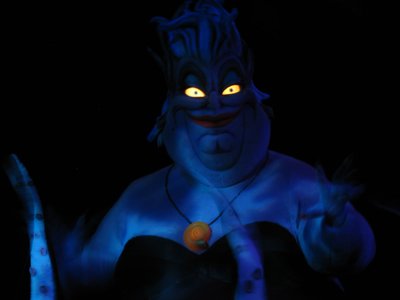 When The Little Mermaid was released in 1989, the world was taken by storm. How could anyone resist being captivated and humbled by the “tail” of this selfless and brave mermaid princess, her struggles to fit in her family, and her love for the human world – for one human in particular, the dashing Prince Eric. With unforgettable songs and characters, beautiful hand drawn animation, and setting in a dazzling and colorful world under the sea, this movie has remained one of Disney’s classics. Little girls today still wish they could be as smart, spunky and pretty at the film’s title character, Ariel. This adventure has been brought to life in a whole new way on the Disney stage in the form of Disney’s “Voyage of the Little Mermaid” at Walt Disney World Resort, in Orlando, Florida.

This Broadway style stage show brings to life all the magic and fun of the animated favorite. Enjoy eye-popping special effects, toe tapping musical numbers and reliving the moments of this classic story of love, sacrifice and ultimately, happily ever afters. The show’s music includes the most popular songs from the film’s score – the whimsical song Ariel sings, longing for adventure and a new life for herself “Part of Your World.” Of course, what would the Little Mermaid be without Sebastian’s tribute to the grandness of life “Under the Sea;” and who doesn’t get a chill, even a bit of a thrill when Ursula the Sea Witch belts her evil melody, “Poor Unfortunate Souls?”

Located in Disney’s Hollywood Studios theme park, the theater that hosts these live performances is even decorated to make you feel like you are on the ocean floor, up close and personal with Ariel and all her friends. From the moment you enter the theater, and even in the holding area where you wait before you are let in, the walls of the theater are undersea reefs, with colorful corals and creatures adorning them. Between the décor and the light water mist that adds to the impression of being under water, you will gain a whole new understanding and appreciation of Sebastian’s calypso-ode to life beneath the waves, “Under the Sea.” Truly, the best vantage point from which to follow a mermaid’s adventures is from the ocean floor.

How Do They Do It?

So now, of course, you’re thinking, “Wait a second here. I’ve seen The Little Mermaid. There are fish, evil women with tentacles and Mermaids. How on earth are they gonna manage that on stage?” You’re thinking, “Not even Walt Disney is that magical, right?” Wrongo. A combination of costumes, lights, special effects, multimedia integration and good old-fashioned puppets is what Disney uses to create this amazing attraction.

Many of Ariel’s fishy friends from the feature film make an appearance in this show, so of course there is a Sebastian Puppet, a Flounder Puppet, and even Ursula the Sea Witch is a giant puppet to make her evil presence even more domineering than it already is – careful, this might actually be a bit scary if you have small children. These hand-crafted puppets look like they walked right out of the movie. In fact, you’ll find it hard to believe how much like the film this abridged 15-minute show is; making it just that much more awesome to see – after all, who doesn’t want to see their favorite fairy “tail” come to life?

The abbreviated nature of the show is convenient because it means that more, rather than fewer people have time to see the show. A longer show would have a longer turn around time, which would translate to more time spent in line. Also, because there is so much to see and do at Walt Disney World, most of the live shows are kept under 30 minutes in length, to ensure that you can enjoy them without taking too big of a chunk out of your day. If lines aren’t your thing, look into getting a Disney FASTPASS – which is applicable at this attraction. FASTPASS is a free pass that you can pick up at the beginning of each day that reserves your spot in a line, and so you can do other things while you are waiting for a particular attraction or entertainment.

Walt Disney World Resort wants to be as inclusive as possible in regards to who is able to enjoy the “Voyage of the Little Mermaid” show. They offer captioning and amplified audio devices for guests who are hard of hearing. They also have seating that can be removed for wheelchairs, scooters or other Electric Convenience Vehicle – (EVCs).

Other Live Shows Based on Your Favorite Disney Movies

There are other live shows throughout Walt Disney World Resort based on some of your favorite Disney films. In the Animal Kingdom, you can take in 3 different fun and fabulous shows – the Broadway-style “Festival of the Lion King,” the unique 4-D interactive experience, “It’s Tough to Be a Bug” based on the Disney film, “A Bug’s Life,” and “Finding Nemo – the Musical.” Located in Disney’s Hollywood Studios theme park like the “Voyage of the Little Mermaid,” is “Beauty and the Beast – Live on Stage” – a lavish, Broadway style production of another Disney classic fairytale favorite.

Walt Disney World Resort offers some of the finest in live entertainment – it is just not a part of the theme park resort that you usually hear about. Usually, people are raving about the rides or attractions, and they somehow forget these amazing, family-friendly musical productions, that you would have to pay incredible amounts for were you to see them on a Broadway stage. These shows pack as much magic and excitement as Disney’s rides, attractions and parks, so be sure when you visit Walt Disney World, you work them into your busy schedule. You won’t regret the opportunity to see these enchanting stories brought to life as only Disney can.