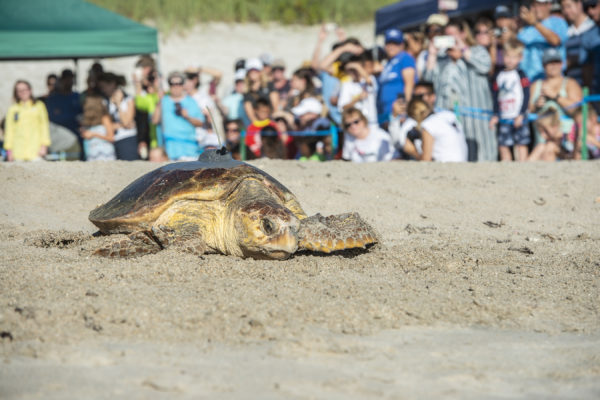 If you’re a parent, you’ve probably seen the “Sea No Turtle” episode of Puppy Dog Pals on Disney Junior or The Disney Channel. This episode shows Bob, an inventor and the owner of Bingo and Rolly, traveling to a beach resort at which he experiences a sea turtle outing and release. Bingo and Rolly, who are the real stars of the show and aim to fix all of Bob’s problems, find a young sea turtle hatchling who has been distracted by the nearby carnival lights. They must try to help the turtle get to the ocean so he can be safe!

This heartwarming and adorable story about how two puppy dogs befriend a sea turtle actually, in many respects, brings to light (pun intended) a real problem, and Disney is working to help the effort!

On Saturday, July 27th, 2019 at 7:30 AM, Disney hosted the 12th Annual Tour de Turtles at Disney’s Vero Beach Resort, just two hours southeast of Orlando. Every year, Disney’s Vero Beach, one of the most important nesting habitats in the western hemisphere, hosts the Sea Turtle Conservancy and Disney’s Animals, Science, and Environment Team as they attach satellite tracking devices to two loggerhead sea turtles and release them into the Atlantic Ocean for the Migration Marathon.

The official purpose is to follow the migration of sea turtles from their nesting beaches to their feeding ground and see just how far they swim. The effort starts at Vero Beach where researchers identify, mark, and monitor sea turtle nesting grounds so we can be sure that sea turtles have a safe habitat. The data that are collected helps researchers, conservationists, and governing agencies make appropriate method and policy decisions to help maintain the sea turtles’ habitat.

Since Disney launched the program in 2008, 20 turtles have been studied; they’ve also contributed over $3.5 million to help sea turtles worldwide. With the help of Disney, the STC has identified important aspects of sea turtle behavior including foraging, seasonal movements based on water temperature, and potential critical habitat locations for loggerhead turtles.

This year, the two participants are named Ariel and Ursula. Whoever swims the farthest wins! Ariel is sponsored by the Disney Conservation Fund and is swimming to raise awareness about how plastic debris affects the ocean environment and turtles in particular. Ursula, sponsored by Disney’s Vero Beach and Disney’s Animals, Science, and Environment team, is swimming to bring awareness to the threat of light pollution – the issue addressed in the “Sea No Turtle” episode of Puppy Dog Pals discussed above.

If you’re a Disney Vacation Club Member and you’d like to help the sea turtles, you can join outings to observe the sea turtles and learn how to get involved.

There are plenty of other family activities for Vero Beach Resort guests during the event, too!

Does Disney do a good job of helping the environment?