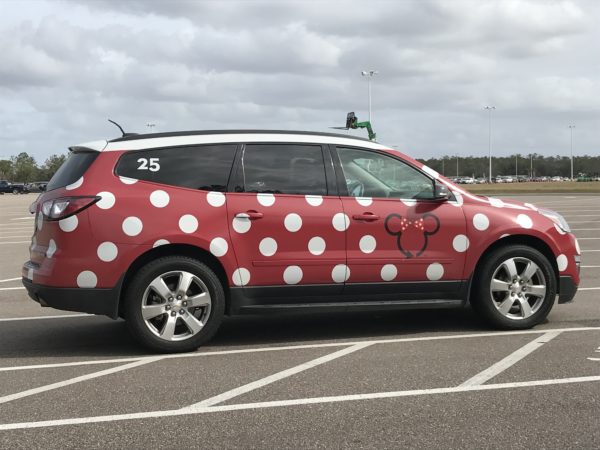 Today, transportation has made leaps and bounds when it comes to technology, but I suspect Walt probably wouldn’t be too surprised.

I think he would be pretty happy to see that Disney World is rumored to be moving forward with their testing of self-driving cars!

The news was actually leaked in a press event last year, and testing was supposed to begin in the backstage area of Epcot late in 2017. The tests never happened, and Disney never even confirmed that the tests were going to happen.

However, a Disney insider recently said that Disney is planning to test self-driving cars on property, and it’s going to happen this year.

Disney recently partnered with Lyft, a ride share program, to create the Minnie Van service, which uses Chevy Traverses driven by Cast Members who received some kind of special training to provide this service. It’s no surprise that Chevy was involved in this venture because of Disney’s long history with the company and it’s current sponsorship of the Test Track attraction.

Self-driving shuttles seem like the obvious next step, and Lyft is even working on creating it’s own autonomous cars. What is surprising is that GM is in talks with Uber, Lyft’s largest competitor, on their own self-driving research.

Still, many people wonder if this new high technology is ready for public use especially considering the recent self-driving accidents that have been big stories in the media lately.

Still, Disney is reportedly forging ahead, but they are planning to do more tests than originally planned. In fact, the shuttles will only be used by Cast Members at first and then rolled out to guests via the Minnie Van service.

Why is Disney so confident that their system will work?

Well, Disney World is reserved, for the most part, for vacationers, and very few people travel into Disney World on a casual day (save for the Cast Members who travel there for work). The roads have more controlled conditions, and the cars will have more predictable routes. There are also fewer unpredictable independent drivers. What’s more, in backstage areas, there’s a total absence of other vehicles. This could be the next “Express Transportation”.

Disney isn’t working alone though. Besides Lyft and Chevy, Disney reportedly has two companies working on the technology.

Local Motors, out of Phoenix, AZ, already has autonomous cars in Knoxville, TN, and they even had a booth at the 2015 car show that looked very much like Innoventions. Inside the booth, they 3D printed a self-driving shuttle design live at the show!

The other company is Navya. While it’s based out of Paris, France, they currently have successful operations running at the University of Michigan. They also ran a two-week test in Las Vegas last year, but there was an accident on the first day of testing.

It’s not clear whether both companies could get a final contract or if only one would be chosen. It’s also possible that Disney would extend their exclusive partnership with Lyft and use their self-driving cars. After all, the Minnie Van service has been highly successful. It started at a couple Deluxe Resort Hotels and has since then increased the number of stops around the resort. Lyft is also significantly larger than Local Motors and Navya, so they might be better equipped to provide the best service to Disney World and its guests.

If Disney and its partners can get the technology to work, and if people trust it and use it, it could make for a much better guest experience.  Imaging Disney being able to deploy hundreds of self-driving cars to parks after they close for the night, greatly reducing the wait times people currently experience while standing around for the next bus, boat, or even monorail to appear.  It would make for a much better end of each day in the parks.

Would you take a self-driving shuttle at Disney World?