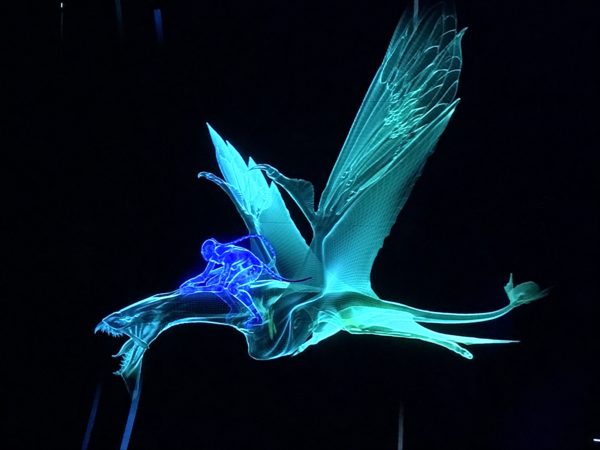 Pandora – The Land of Avatar opened less than a year ago.  It’s still filling my news feed.

It’s one of Disney’s most ambitious project yet, and it doesn’t disappoint. Lines were so long on opening day that they wrapped around the Tree of Life twice, and people were even turned away because the land had reached capacity in the early hours of the day.

There’s so much to know bout this intergalactic land, so let’s take a look at the top 15 things you need to know about Pandora.

If you’ve ever traveled to a foreign country, you know that one of the most important skills is to be able to speak the language. The Alpha Centuari Expeditions team leads explorers to Pandora, so of course they know how to speak the Na’vi language,

When it was first created for the movie Avatar, actors were expected to speak correctly using proper pronunciation, stress, and intonation, which are all essential in any language. By the time the movie was released in 2009, there were 1000 words in the vocabulary. With the help of super fans, that number has increased more than two fold!

Let’s start with some basics:

Because the Na’vi language has free word order, there are several different ways to say things like 17 different words that refer to “food” for example. Syuve is the collective noun referring to all food.

One of the earliest pieces of news even as Pandora was still in very early development was that the land would be bioluminescent specifically in the plants. If you cup your hands around the bioluminescent plants, you’ll realize that they are indeed glowing. Since the sun is out during the day, it blocks the light from the glowing land.

Pandora is home to some interesting plants, and I’m not talking just about the glowing ones. There are four exploding sea plants throughout the land. Fortunately, these plants only shoot water, so they’re nothing we need to worry about.

As the plants mature, they grow flowers that explode out seeds which the Na’vi use to rejuvenate their skin – a veritable Fountain of Youth.

Eek! How long will it take Pandora’s plants to mature?!

If you listen closely, you can hear the faint sounds of the shy and elusive Hexapede. This six-legged animal looks like a gazelle, and it’s equally fast, which is a good thing since they are a prime target for predators of the land or air. They are a primary source of food for the Na’vi and are often hunted. Fortunately, their veracious reproduction keeps their numbers high.

Besides being a source of nutrition, the hexapede’s leather is also used to make clothing, musical instruments, and shields. The hexapede has cultural significance as well since it is the first animal that a Na’vi is allowed to kill when making the right of passage.

The hexapede can be found in the fields of Helicoradian where they can easily weave back and forth avoiding predators.

The plants in Pandora don’t just glow- they’re actually alive! The helicoradian plant is part plant part animal and has a neuromuscular system that allows it to coil and retract to the ground when touched.

The single orange leaf can grow between 20 and 26 feet high and 8 feet across. Since they’re so large, they provide functional help for the Na’vi people including making garments, tents, and sacks, or they can extract the orange pigment from the plant to dye things.

6. Why do the mountains float?

Pandora has plentiful deposits of unobtanium, which is why humans want to travel to Pandora in the first place. Since Earth has been completely exhausted of all its natural resources, we need to capture the unobtanium to continue to sustain life.

This unobtanium is valuable on Pandora too, and as the movie shows, the Na’vi will fight to defend their land. The mineral is highly magnetic which repels the mountins making them float. The Hallelujah Mountains (or Thundering Rocks as they’re called by the Na’vi) are actually pieces of unobtanium that have broken loose from the surface and now float in the air.

The chalice plant, known as yomioang meaning “animal eater”, looks like what we known on earth as a bromeliad. It has a pitcher-shape area at the top covered by a single petal. It looks like this area would collect water (which it does), but it also holds a sweet nectar that attracts small animals. Once they crawl in, they are unable to crawl out and they drown in the water where the plant produces enzymes to breakdown the animal for absorption.

The chalice plant is quite large measuring more than 16 feet tall. Despite the size of this plant, it is pretty harmless. It can’t reach out and grab something in, so as long as you keep your distance and resist the draw of the nectar, you should be fine.

The vein pods are a keystone species on Pandora meaning they are essential to sustaining life. They stabilize the environment by collecting methane from the atmosphere in their sponge-like branches where they hold it to prevent the dangerous gas from collecting in the atmosphere. Methane as a really bad oder, and since it’s concentrated in these pods, the pods also smell bad. Because of this, they are called “varumut” meaning bad (smell) ball tree.

When methane is concentrated in high amounts, it will eventually explode, but since Pandora is a moon with thick air, the thin methane causes the pods to simply detach when they’ve collected a certain amount of methane and drift off into the air like balloons where they explode without causing harm or damage to the people or land of Pandora.

The Spiny Whip is aptly named pxayzekwa, which means “many fingers” in Na’vi language. It is also a form of bromeliad because it collects water in the large base surrounded by finger-like extensions. It also collects methane in the cup. When the stems become full of methane, they will violently explode from the cup then go off and reproduce a new Spiny Whip plant. You can witness this explosion occasionally at Disney’s Animal Kingdom when the plant spews water.

Interestingly, birds also use the cup to bathe in and drink from, so it works as a natural bird bath. Since the methane transfers to the fingers, the birds are not effected by the methane.

Bladder Polyps are the small finger-like protrusions that sometimes look like upright stones. They are usually shades of blue and have small brown leaves which the Na’vi people and animals eat. Once the leaves are removed, they will regrow quickly. A really unique quality about this plant is that it uses manure (animal waste) as a direct food sources. What’s more it can survive in salty soil and absorb water through osmosis. This combination of salt and water gives the bladder polyp a taste a lot like a pickle.

Alpha Centauri Expeditions, or ACE, is a group of scientists, explorers, and adventurers from earth who arrive on the Pandora Moon to help reverse the damage created by the Resources Development Administration when they invaded to mine for unobtanium.

These people work day in and day out on a foreign body and they bring visitors to Pandora, so they’ve adapted to the area and adapted the area to them. One such way is Pongu Pongu, which is an open-air lounge run by an expat. The lounge serves incredibly beautiful and delicious drinks and a yummy snack called Pongu Lumpia.

Pongu means “party”, so the lounge is called Party Party. It’s appropriate since the alcoholic drinks are not only delicious but look like they’re other wordly.

All young Na’vis experience a right of passage when they bond with a mountain banshee, which is a large bird-like predatorial creature used for hunting and travel on Pandora. The bonding experience is dangerous but is required for Na’vi warriors. Besides being dangerous, it’s difficult since mountain banshees only bond with one person in their lifetime. If a match isn’t made, neither the banshee or the person can live a fulfilling life. The Na’vi connects with the banshee through a neural interface, which allows them to move effortlessly as one becoming a powerful and effective pair. Once an effective bond is made the Na’vi person is considered an Ikran Makto or “Banshee Rider.”

You can experience this right of passage, at least in part, in the Flight of Passage attraction.

Those floating jellyfish looking figures in the Na’vi River Journey attraction are called Woodsprites. Where as jellyfish occur in the ocean, these woodsprites occur in the woods or forest. It is a seed of the Tree of Souls, and the seeds are considered pure, sacred spirits who are said to be an omen of something going on.

Woodsprite seeds are often placed in deceased people to guide them to the tree of souls, or the hometree.

Pandora is known for the use of totally new technology, but it’s the new spin on old tech that really impresses. The Shaman of Songs is a climactic part of the Na’vi River Journey, an attraction that takes guests on a river tour through a bioluminescent forest on Pandora. While most of the ride uses projection technology to show guests around Pandora, the Shaman is an animatronic creature that takes an old technology and makes it something new and impressive.

While you can tell that the Shaman is an animatronic, her movements are much smoother than ever before. She uses her very long arms to tap drums around her, and you can really feel her significance in the Na’vi culture.

All of these facts taken together and so many more prove that Pandora is one of the most interactive lands Disney has ever created. There are plants that respond to movement by spewing water and areas where you can play drums of the Na’vi.

One of the most interactive and immersive elements is the fact that ACE representatives are available throughout the land to answer questions with such legitimacy that you really feel like you’ve traveled to another world. They can teach you the Na’vi language, explain vegetation, and provide information about cultural norms. It’s really something you have to experience to understand.

Have you visited Pandora at Disney’s Animal Kingdom?