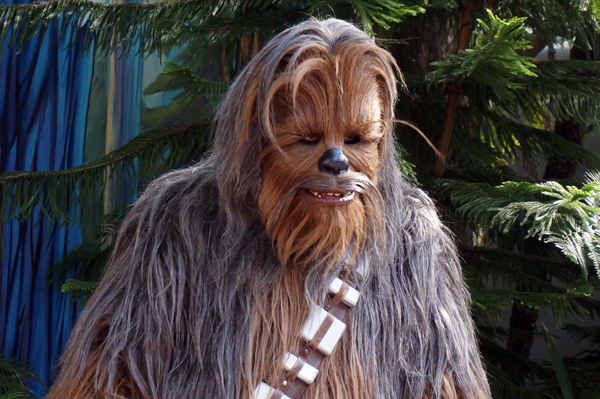 Star Wars Land is well underway, and fans are getting excited. Even as many other things have closed in Disney’s Hollywood Studios, Star Wars experiences are opening.

If you’re a Star Wars fan, you may want to consider the seven-hour Star Wars Guided Tour, which will give you unparalleled VIP access to all things Star Wars at Walt Disney World. The tour costs $129 (including tax and gratuity plus regular park admission) and takes place on Mondays and Saturdays from 1pm to 8pm.

Let’s take a look at the nine experiences you’ll have during the Star Wars Guided Tour.

1. Star Wars: Path of the Jedi

Star Wars: Path of the Jedi is a 10-minute film retelling of the Star Wars saga. It reviews all seven movies plus Rogue One and gives a sneak peak at the future of Star Wars, which will include a Han Solo movie plus Episode VIII and IX.

Right now, Star Wars is all about the shows. This tour includes reserved seating for Star Wars: A Galaxy Far, Far Away and March of the First order.

Star Wars: A Galaxy Far, Far Away is a live reenactment of famous parts of the movies. There will even be some Rogue One characters who make an appearance.

The March of the First Order is a display of power and obedience. Captain Phasma leads her Stormtroopers down Hollywood Blvd to Center Stage where put on a demonstration.

3. Jedi Training: Trials of the Temple

Young tourists, ages 4 to 12 years old, can enroll in Jedi Training: Trials of the Temple while the adults watch from the audience. Kids become Jedis in training and learn how to use The Force and lightsabers to defeat The Resistance.

After a training session, the temple doors open and Star Wars villains arrive. They must use that they’ve learned to defeat the villains.

Star Tours: The Adventure Continues opened in 2011 and has been delighting audiences since then. It started the partnership between Disney and LucasFilm, and now that Disney has purchased the franchise, they can expand on this attraction.

The simulator ride has been refreshed throughout the years as new films were added, so it’s always exciting and relevant. When the StarSpeed 1000 takes off, you never know where you might land. What’s more, the ship can take you to dozens of places, so the experience is never the same.

Around dinner time, tourists will be led to Backlot Express quick-service restaurant where you’ll enjoy a Star Wars-themed meal with things like a Royal Guard Burger, Dark Side Chicken and Waffles, and a Galactic Chicken Salad. For dessert, try the BB-8 Lemon Cupcake with vanilla buttercream or the Darth Vader Chocolate Cupcake with Peanut Butter Buttercream.

The Star Wars Guided Tour gets you a special meet and greet with Chewbacca and Kylo Ren. The two characters are very different, so this will be an exciting experience.

Chewbacca is Han Solo’s co-pilot and partner on the Millennium Falcon. Kylo Ren is Han Solo’s son. Although he was trained as a Jedi, he turned to the Dark Side and aspires to be like his grandfather, Darth Vader.

During your tour, you’ll get VIP access to Star Wars Launch Bay. Your tour guide can answer questions, tell stories, and give you some trivia regarding the items you find.

This amazing, multi-media show combines fireworks, projection mapping on the Chinese Theater, fire, lasers, fog effects, and search lights to depict battle scenes, heroes, romance, villains, and all seven original film posters. Being so close, you won’t miss a minute of the excitement!

At the end of your tour, you’ll receive a personalized souvenir to remember your day immersed in everything Star Wars. It’s a day you won’t want to forget!

Yes, overall this tour is mostly a series of Star Wars undertakings, which are open to the general park-going public, stitched together with a meal and and a gift.  Still, for big fans, the meals, gifts, and reserved seating may make it worthwhile.

Will you try Disney’s Star Wars Guided Tour in the parks?